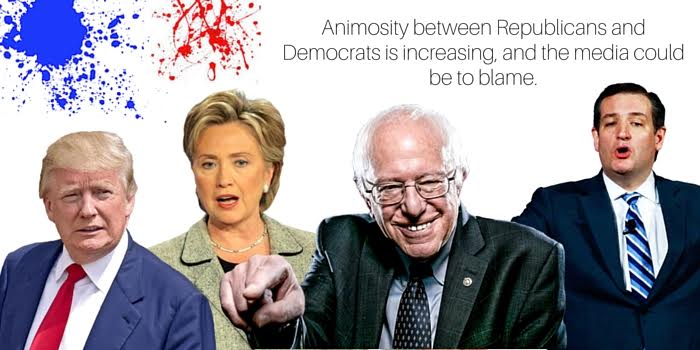 A rally for Donald Trump in Salt Lake City, Utah was met with the fervor you would expect of a candidate whose name alone has the power to affect attitudes and beliefs about any given policy. Juxtaposed in the parking lot next to the arena where Trump’s rally was being held were supporters chanting Trump’s campaign motto, “Make America Great Again!”, and his antagonists shouting, “Dump Trump!”. The crowds were composed of neighbors and coworkers; friends during their lunch breaks and on weekends, but enemies at a voting booth.

Animosity between the two political parties in the United States is increasing; and the role that media plays in our society could be what’s affecting this growing polarization.

While serving in the House of Representatives from 2001 to 2015, Matheson spent five to six years working with Democrats and Republicans on a bill designed to help combat counterfeit drugs. In late 2013, the bill passed and was signed into law by President Obama. While the bill was passed as a bipartisan effort, the U.S. mainstream media made little to no mention of the bill’s passing.

“At the end of the day, we passed the bill in the House and Senate and the President signed (it). And no one ever heard about it,” Matheson said. “There are things that get done and the public never gets exposed to it because it’s not exciting, it’s not provocative.”

Matheson’s statements highlight the interesting, and integral, role that media plays in how Americans perceive politics. 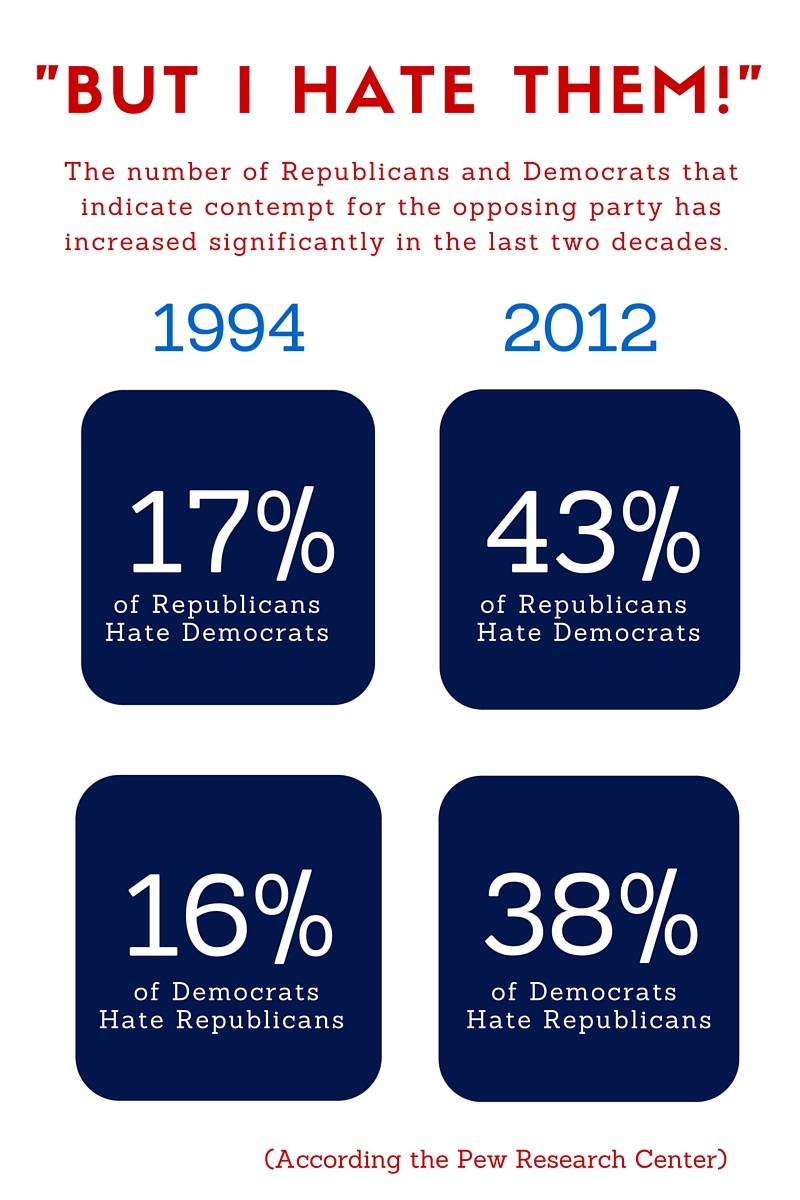 According to data collected by the Pew Research Center in 2013, politics in the U.S. are more polarized than it’s been in decades. The ideological divide between Republicans and Democrats is also wider than it’s been in years. A glimpse of this polarization can be seen by peering into recent legislative sessions in Washington. The 113th session of Congress (held from 2013-2014) passed 165 bills compared to the 303 bills the 108th session (2003-2004) passed.

Additionally, animosity between political parties is increasing. The Pew Research Center found the number of Republicans and Democrats who express a strong dislike for the opposing party has doubled in the past two years.

This isn’t the first time politics in America have been deeply polarized. According to the U.S. History Online Textbook, the first presidential election with candidates from two different parties, held a short 20 years after the birth of the nation, was considered “hostile.” The two parties, the Federalists and Democrat-Republicans, fought over issues like the role of the federal government.

Scholars have come up with a myriad of theories to try and describe this trend, even attributing current polarization to issues like gerrymandering and rule changes. One of the prevailing theories is the availability of niche media has conditioned individuals to self-select into only consuming media that shows the world as they perceive it — isolating themselves from the other end of the spectrum and turning themselves against the “other side.”

Several decades ago, 80 percent of the population relied upon just a few news sources for their political information. However, this started changing as the emergence of cable news stations provided a wide array of information that tends to lie in various places on the political spectrum. Fifty years ago, there were only three sources on television for news: CBS, NBC, and ABC.

While those networks still exist today, additional networks like CNN, Fox News, and MSNBC among others also add to the proliferation of news outlets on television.

Soren Schmidt, who works with a bipartisan organization committed to solving problems in American politics, thinks this tendency to self-select into news outlets that promote one’s worldview has caused the schism.

“You see these channels that are more polarized that definitely speak to a certain ideology,” Schmidt said. “People tend to agree with one of those because they get less cognitive dissonance when watching that channel, and they tend to self-select into watching that channel even more.”

The proliferation of websites dedicated to specific political ideologies has also contributed to the polorization.

“Not only are there websites dedicated to a very narrow worldview on things in terms of political ideology … but then that’s the only information they get, which reinforces them even more,” Schmidt said.

“The digital world was created with no traditional barriers. It can be any guy sitting in his basement at a computer screen. In some ways that’s good, but it’s (also) bad because there’s no fact-checking,” Matheson said. “As much (as) people (were) critical of the media, there were in the old days certain standards they maintained. Those standards have been weakened and that’s created a lot of less good information. People have learned to use it for their own agenda. This isn’t limited to politics. It’s the Wild, Wild West as far as information flow.”

Video: Random people were asked if they could name anything significant Congress had accomplished in the past 5 years. Here’s what they said:

Brandon Willmore, a lifelong observer of politics, believes people can avoid receiving bias in the news by reading a variety of news sources.

“Read a variety of sources, but focus on sources of news that make their money for being accurate rather than entertaining,” Willmore advised. “A lot of T.V. programs, especially talk show programs on Fox News or MSBNC, are set up in such a way that they have entertainment value and are entertaining for people of certain party or belief system. On the other hand, news outlets like the New York Times primarily make their money because they’re a credible news source.”

“I generally don’t use social media, whether it be Facebook, Twitter or anything to discuss politics,” Adams said. “I generally get my information from sources I seek out. Sometimes I may observe a headline while on social media, but I don’t really engage with it. I think keeping myself separate from it makes it less about an argument and more about what I actually think.”

While the mainstream media has cemented its place in American culture, Matheson, who works as a lobbyist, thinks the growing polarization of politics can be hindered by encouraging the country’s moderate-leaning population to vote.

“We have to find a way to motivate the rational moderate to participate in the political process,” Matheson said. “I think if you plotted America on a scale you’d see a pretty moderate bell curve … the passionate people (on the edges) are a minority of people, (but) the passionate people are the ones who show up in the nominating process. Most people don’t engage.”

Matheson remarked that some of the most partisan members of the U.S. Senate in both parties are the frontrunners of their respective presidential campaigns.

“I think we have a lot more common ground as Americans than we talk about. We are different than a lot of the world and we are a lot more centrist than we acknowledge. I think ultimately that’s going to carry the day.”

“The roadblock is the passionate people. There’s no passion in moderation.”