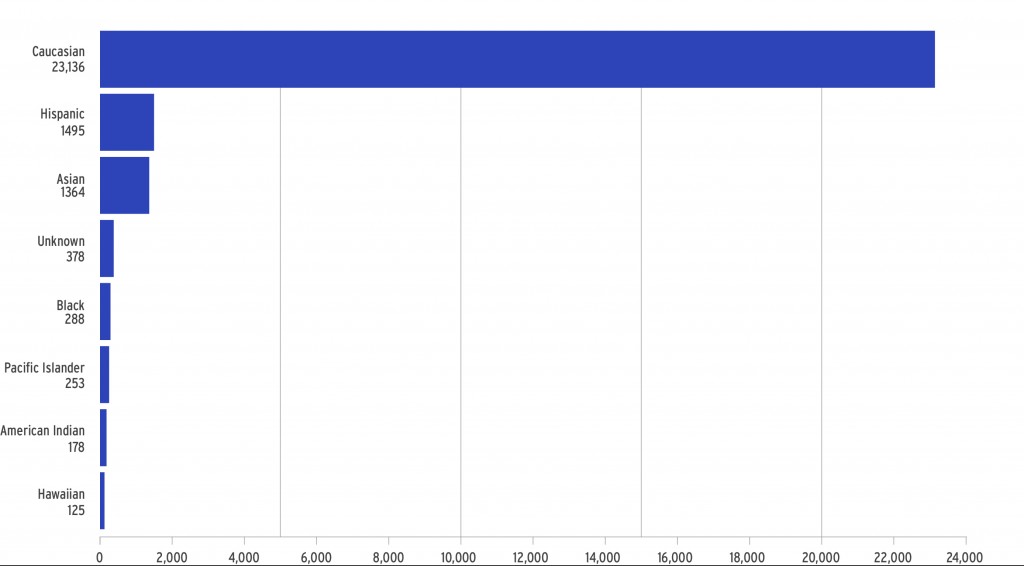 Jeanna Lifungula-Humble, a business management major from the Democratic Republic of Congo, believes BYU makes up for the lack of ethnic diversity with cultural diversity.

“I would say BYU is very diverse,” Lifungula-Humble said. “I don’t think there are a lot of campuses out there where there are students that speak so many languages and have been to so many different countries. Yes, what you see and what meets the eye might not be diverse, but I think we are well-cultured. Many of the students that I have met here know multiple cultures.”

Lifungula-Humble lived in the Democratic Republic of Congo until he was 12. He then moved to the United States with his father and younger brother where he lived in Oakland, California, and in Clackamas, Oregon, until he graduated from high school. At 18, he was adopted by the Humble family, who now resides in Highland, Utah.

BYU encourages diversity through a variety of means, including scholarships. Lifungula-Humble is a recipient of an International Student Scholarship.

“This is a really good program full of kids who have the ability to speak different languages and are from different countries,” Lifungula-Humble said. “They have a whole different background and are willing to work hard in school. This gives them the opportunity to perform really well in school and also share their talents and gifts that their different cultures have given them with others.”

Todd Hollingshead from University Communications believes BYU students have many life experiences that add to the school’s variety in culture.

“BYU students come from more than 100 countries and all 50 states, bringing rich, diverse life experiences to our campus,” Hollingshead said. “Opportunities to study abroad and serve missions internationally have also added to that depth of life experiences.”

According to Hollingshead, about two-thirds of BYU students speak a second language. These languages are learned both from family backgrounds while in their youth, as well as from serving missions or studying in school. Collectively, BYU students speak about 126 languages.

Beyond this, BYU offers culturally enriching experiences through its International Studies program. According to Hollingshead, the program is one of the largest in the country, with 150 programs found in 56 countries.

“A total of 1,555 students studied abroad in 2015; about 17 percent of students will study abroad by graduation,” Hollingshead said.

Bridget Mays, president of BYU’s Black Student Union, said she feels most BYU students are open to the diversity that minorities have to offer.

“I believe that because so many of the students here have gone on missions, they are fairly open to other cultures and they respect them,” Mays said.

According to Mays, the Black Student Union has been around since the ’80s. Mays says she likes to think of it as more of a support group. It doesn’t matter what race someone is; anyone is welcome to attend.

On campus there is a Latino club, a Tribes of Many Feathers club for American Indians, several Asian clubs and many more. These can be found at the BYUSA clubs page on BYU’s website.