Many forces are combining to get BYU students to caucus meetings on March 22. 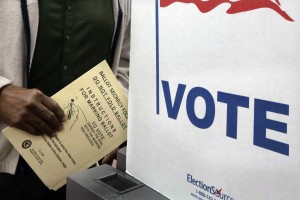 “I really believe that it’s important that good people are involved in politics,” Sandstrom said. “When I see that only about two percent of Utahns go to caucus meetings, that worries me, because I think of the 98 percent who aren’t having their voice heard.”

Sandstrom quoted BYU’s Mission and Aims Statement, in part, which states one of the aims of the university is to prepare students to engage in civic duties and to expand influence in the world.

LDS church members in Utah are familiar with a letter from the First Presidency that is read from the pulpit during voting seasons.

“We are concerned that citizen participation rates in Utah are among the lowest in the nation, and we urge greater involvement by members of the Church in the 2016 election cycle,” the letter states.

According to the Lieutenant Governor’s Office, the percentage of 18- to 25-year-old voters in an election hasn’t broken double digits in the past 10 years, even though the age group represents 12 to 13 percent of Utah’s population. In 2014, only 1.3 percent of voters were between ages 18 and 25. The past two presidential elections in 2012 and 2008 saw bigger but still small numbers with 18- to 25-year-old adults making up 7.4 percent and 8.2 percent of voters, respectively.

Nationally, Utah has fallen behind the average percent of the eligible population voting in congressional elections since the mid-1990s, the largest gap coming in 2006.

He said Utah’s millennial population has been bigger than the boomers for the last 15 years.

“So, if just half of them voted, they would influence politics in a way no one else can,” Kroes said.

He also said millennials are disconnected from voting because they feel distant from “political power structures” and equate other forms of activism —like consumer activism and donating — with direct change rather than voting.

Sandstrom initially became involved in political engagement while he was a freshman at Southern Utah University in 2012. He came to BYU in spring 2015 and began sharing the idea with various professors, gaining advise and insight into political organization.

He saw a need for a voter participation effort that wasn’t backed by a party or candidate’s agenda.

Sandstrom founded the group in October 2015 after attending a political leadership training, and he recruited like-minded individuals from other on-campus political activities. They held their first meeting on Nov. 13, 2015, marking the birth of the College Caucus Project.

After setting up a website and social media presence, project leaders and volunteers started canvassing on-campus housing on Feb. 20, 2016. They have gone to various student housing complexes on and off campus every Saturday since.

“This project is unique because it has always been about the students,” Sandstrom said. “It’s less about a political effect on a community … The effect we’re hoping to have is to give students a positive experience in politics.”

Sandstrom thinks most students are made cynical toward politics because of poor experiences on social media and other online media.

Regardless of individual attitude, students need to be equipped to engage in civic duties and politics when they graduate from BYU, Sandstrom said.

Kroes said millennials are showing a portion of their voting power in the Democratic Party primary race where Vermont senator Bernie Sanders is winning the millennial vote and thus gaining momentum.

“(No) one knows who is running for governor or state senator,” Sandstrom said. “But these local elections are the ones that will have the biggest effect on us as students.”

The future of the organization is dependent on the student turnout on March 22 according to Sandstrom. If there is no measurable impact on participation, the project will likely discontinue. The College Caucus project could expand to advocate for greater student involvement in local and state elections by becoming an official BYU club.

“I want them to recognize their power and start to engage,” Kroes said.

He understands voting and political engagement is a slow-moving process for change.