Thunderous footsteps stampede through the stairwells at The Isles Apartments and phones begin to ring. It is 7:02 p.m. and the cable is out — which can only mean one devastating thing for the would-be television viewers: No Bachelor.

“This Monday really threw us for a loop when the cable wasn’t working,” BYU sophomore Megan Hopkins said. “With 10 girls all freaking out, we had another friend’s apartment ready to go with working cable within two minutes.”

Whether fans watch to fantasize about romantic relationships, be entertained or just to have a good laugh, “The Bachelor” is becoming increasingly popular, including in Utah.

The hit ABC reality series airs twice a year and stars one lucky bachelor or bachelorette looking for his or her one-and-only. This show has swept the nation as one of the most watched TV series since 2010, with its 20th season wrapping up on March 14.

“I watch because it is an excuse to see my friends every Monday and catch up. But we all do secretly wish we could date Ben,” Hopkins said. “Sometimes we grab dinner for everyone, or, if there is high drama, we break out the ice cream. Yes, we are the biggest girls.”

Season 15 fan-favorite contestant Michelle Money was unsuccessful in finding love on her season, but the show has brought success in other aspects of Money’s life. For instance, it helped her land a hosting position on ABC 4’s “Good Things Utah.”

BYU senior Brandon Treadway began watching “The Bachelor” at his boss’s recommendation last season. Treadway was skeptical at first that he would be interested in a reality show, but after sitting down with his roommates and watching the season’s four-hour long premiere, he was hooked. It was not long after this that Treadway launched his blog, “The BROchelor: a Bro’s Thoughts on the Bachelor.” 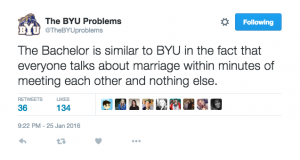 Treadway believes “The Bachelor” is popular for college students because it’s something they can watch in large groups without having to pay too close of attention to in order to understand what’s going on.

“At BYU in particular I think it’s extremely popular because our school is centered on dating and marriage,” Treadway said. “For the girls, there is the fairytale element. For the guys, you can get into the heads of the women contestants and can better understand what women want, but really it just helps us realize that we won’t ever understand women. Not to mention ‘The Bachelor’ is nice because you can watch really beautiful women for two hours, which men are not complaining about.”

Treadway said he studied the way the media presents false realities as simple realities in one of his classes.

“‘The Bachelor’ contains the Cinderella syndrome,” he said. “There is cattiness amongst the women because they all believe they deserve this one person. Oftentimes the women will cut down other women to get the prize. It is oftentimes scripted and when it gets played out in a reality setting, people actually believe this is how you should act in order to get a man.”

Despite the controversies and critics, “The Bachelor” continues to see success.

Ratings were the highest they have ever been during the 19th and 20th seasons of the series. The show ranked 17th with 8.6 million viewers according to Nielsen ratings for Feb. 22-28.

“The Bachelor” airs Monday nights at 7 p.m. on ABC.