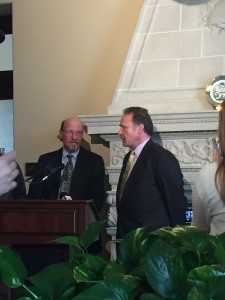 Sen. Mark Madsen, R-Saratoga Springs, was flanked by former University of Utah and Weber State football coach Ron McBride and Dr. David Barton as he stumped for SB73, the medical cannabis bill he sponsored that has gained much attention in recent weeks. McBride voiced his support for the bill, and the whole-plant aspect which separates it from SB989, the other medical cannabidiol bill that has been introduced to this year’s legislature by Sen. Evan Vickers, R-Cedar City. A similar bill sponsored by Madsen in last year’s senate lost by one deciding vote, and this year’s version has received opposition from the Church of Jesus Christ of Latter-day Saints.

McBride cited examples from his personal life, including the story of his autistic grandchild who suffers from seizures, in his promotion of medical cannabis. In a short stump speech for the SB73, McBride discussed success stories from acquaintances who received medical cannabis treatments under Hawaii and Oregon state law, and urged support for similar medicinal opportunities in Utah.

McBride said “to me this is a no brainer . . . it is just stupid if you don’t pass this bill.”

Dr. David Barton, a physician and supporter of medical marijuana, flew in from Hawaii to provide support for SB73. Dr. Barton cited medical studies in support of the use of medical marijuana including the superior medical qualities of the whole plant treatments over cannabidiol treatments.

Dr. Barton explained that SB89 advocates the use of “only one of eighty marijuana or cannabinoid extracts,” whereas SB73 supports the “whole plant extract.” Dr. Barton further went on to characterize opposition to SB73 as a negative emotional response to the idea of marijuana, whereas any other medication with similar effects would simply be passed on.

Madsen went on to field questions, discussing the upcoming vote. Madsen expressed strong support for a ballot initiative if his bill does not pass. The senator also weighed the possibility of adjusting the bill’s language to garner further support.

Discussing the upcoming vote, Madsen predicted a close vote after all. Madsen further explained the effect of the LDS churches’ statement on his bill.

Madsen said “that cost me one vote. I had one solid guy that left after the churches’ statement.”

Madsen went on to discuss changing the language in the bill to limit the allowed medication. Madsen referred to federal issues with the schedule-1 classification of marijuana and made note of the past two federal budgets which have included language to deny funding to combat marijuana in the state where medical cannabis is allowed by law. Madsen also entertained a possibility of including language to ensure that users would be dealing with processed extract rather than the plant itself, so as to avoid some concerns of substance abuse.

SB89 has taken a different approach to the issue of medical marijuana and has seen less opposition than SB73. SB89 has also avoided the same opposition from the LDS church that SB73 has. Both bills will be up for debate on the senate floor this Friday.