The BYU men’s tennis team remains undefeated after beating Weber State University on Friday and the University of Nevada on Saturday in Provo. The Cougars are now 5-0.

The team spent last weekend playing in Hawaii and BYU head coach Brad Pearce said that their overnight flight on Tuesday “took a toll” on the team. Still, they were able to sweep the Wildcats 7-0.

“I’m proud of our guys,” Pearce said Friday night. “It was a great effort. (They) responded well physically and did what they had to do to win.”

The Cougars won the doubles point thanks to a 6-3 win from John Pearce and Jacob Sullivan. Andrey Goryachkov and Jeremy Bourgeois also won their doubles match, and Bourgeois said the crowd helped energize the team.

“The crowd was really into it, and me and Andrey got really fired up being on the first,” Bourgeois said. “That’s definitely key, having a big crowd here. I think I played really well.”

Saturday night was not quite as seamless for the Cougars. Coach Pearce said the team faced “some adversity” for the first time all season, but the Cougars prevailed 5-1 against Nevada.

“All credit to Nevada though, because they played well,” Pearce said. “They came out and played some solid doubles matches.”

After losing the doubles point for the first time this season, BYU got the job done in the singles matches. Sullivan swiftly took down his opponent in two sets, followed by wins from Goryachkov and Monroe.

Despite initially being down a few games, Cullimore’s forehand put away shots and lengthy rallies drew out a closely contested match that secured the Cougar victory, supplying the fourth point.

As always, the matches drew a supportive crowd, including Cullimore’s first LDS mission companion from his time in the London South Mission, Matthew Frederickson.

Frederickson said Cullimore would walk through the streets, freezing in ready position, forehand and backhand stances.

“He would always tell me stories about his teammates, and the great experiences they had,” Frederickson said. “I could tell he really missed it, so it’s fun to see him out playing again, and playing so well!”

The Cougars will play Northern Arizona University at home on Friday, Jan. 29, at 5:30 p.m. MST at the Indoor Tennis Courts.

Admission is free, as is the pizza that will be provided. 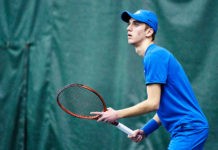 Tennis is life for BYU freshman and son of Croatian immigrants 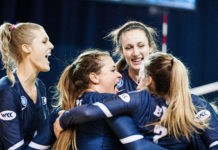 BYU Olympic overview: Milestone for women’s soccer and volleyball wins on the road 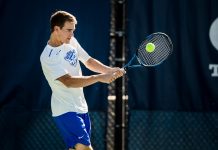