No flip-flops, no shorts and no gym clothes of your own — BYU-Idaho students follow strict dress standards. But BYU has its own guidelines for students, and many still debate the fine line between stubble and beard or pants and leggings.

President Kevin J Worthen addressed the BYU Honor Code in the first devotional of Fall Semester 2015. “Let me emphasize that adherence to each of those standards plays a critical role in our eternal character development,” Worthen said.

Worthen then said he would be more specific about one dress and grooming standard that seems to be “more of a challenge for some than it should be.” Worthen said he noticed that a few men have focused on the statement in the Honor Code that states beards are not acceptable.

He then restated the Honor Code, saying, “Men are expected to be clean shaven.”

For years, many leggings advocates have tried to find specifics in the Honor Code that prohibit certain pieces of clothing. These topics may be under discussion because many have noticed that those who wear leggings are turned away from the Testing Center.

BYU student Fane Harris tweeted, “Most of my wardrobe consists of leggings … Idk (I don’t know) how I’m going to live at BYU.”

In 2011, controversy sparked at BYU-Idaho when a female student wasn’t allowed into the testing center because her pants were too tight. The BYU-Idaho testing center then re-evaluated its standards and decided leggings did not qualify as pants. They also questioned whether skinny jeans should be allowed.

At BYU four years later, women continue to wear leggings on campus. Some wear them underneath skirts or dresses and others wear them as pants. But this isn’t the first time this topic has been debated.

For women, the Honor Code states, “A clean and well-cared-for appearance should be maintained. Clothing is inappropriate when it is sleeveless, strapless, backless, or revealing; has slits above the knee, or is form fitting.”

This has not changed in a number of years. University spokeswoman Carri Jenkins said the most recent significant changes to the Honor Code were made in 1991.

Leggings being worn as pants could fall under the “form fitting” description of the Honor Code.

“Leggings aren’t pants,” BYU student Michelle Wagner said. “You can see everything underneath them. It leaves nothing up to the imagination.”

The Honor Code gives students guidelines but doesn’t specifically say what to wear or what not to wear.

“There is a lot of room for interpretation in the Honor Code,” Wagner said. “This allows you to raise yourself to a higher standard. If we abide by the Honor Code because we want to, it will bring more light into our campus.”

Freshman Anna Christensen and sophomore Melissa Burnham said they don’t have a problem with leggings being worn as pants.

“I think it is your choice to wear leggings,” Burnham said. “I personally feel like wearing leggings is lazy. We all have those days, but there are better options. If you don’t want to wear pants, wear a skirt.”

Christensen said she thinks some pants are just as bad as leggings. She said wearing leggings or pants is really about the motives behind the fashion and how someone want to portray himself or herself.

BYU’s Testing Center says that it follows the Honor Code dress and grooming standards, but students may still struggle with this debate.

Earlier this year, student Makenna Santiago tweeted, “BYU life is slipping on a pair of sweats over your leggings before you walk into the testing center so you don’t get kicked out.” 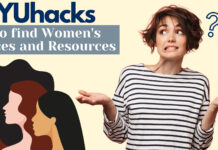