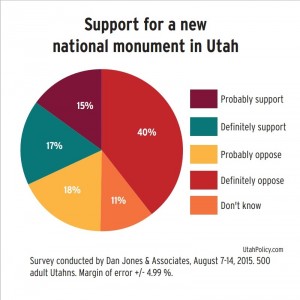 A new poll shows the majority of Utahns oppose the creation of a new national monument in Utah, among rumors that President Obama may create several monuments in the western United States before he leaves office in 2016.

A Utah Policy poll conducted by Dan Jones and Associates show that 58 percent of Utahns either definitely oppose or probably oppose a new national moment in Utah. “When you create wilderness with these national monuments, you create a problem for adjacent counties,” said Rep. Mike Noel, R-Kanab. “You create Class I airsheds. It’s a cop in your backyard waiting for you to do something wrong.”

On the other hand, organizations such as the Utah Public Lands support a new national monument here in Utah.

“Our mission is to preserve and protect open space in order to maintain Utah’s natural heritage and quality of life for present and future generations,” said Wendy Fisher, executive director of Utah Public Lands. “We count it as a victory when we can preserve the agricultural, scenic, recreational, historic and wildlife values of any open land.”

One potential monument location that has been brought up is a significant Navajo site in San Juan County.

Gov. Gary Herbert shares the majority opinion in opposition of a new monument, and recently sent a letter to Obama urging him not to use executive authority to designate a new national monument in Utah.

Jon Cox, spokesman for Herbert, issued the following statement regarding a new national monument in Utah:

“Gov. Herbert strongly opposes a unilateral executive authority to designate a national monument in Utah. He believes there is a right way and a wrong way to determine land management decisions. Unilateral monuments are the wrong way. A ground-up, public process is the right way.”

The Escalante-Grand Staircase Monument was the most recently created national monument in Utah, instituted by former President Bill Clinton in the mid-1990s. The way in which it was created remains widely unpopular with the majority of Utahns.

“Nearly two decades later, this designation continues to be a source of mistrust, frustration and acrimony toward the federal government among local residents,” Herbert said. “I am certain that another presidential monument in Utah will likewise result in decades of resentment and conflict.”

Support for the new national monument in San Juan County comes largely from the Navajo population seeking to preserve places of spiritual significance to the Southwest’s tribes. The new monument would be established where they pray and gather natural materials for food and traditional ceremonies.

Ultimately, President Obama will be the one to decide.

“Monuments are up to the president,” Interior Secretary Sally Jewell said to FOX 13. “I will tell you that there has been interest in monument designations in Utah.”

According to the Salt Lake Tribune, President Obama is currently considering 12 different locations for a new national monument. The majority of potential sites, four out of the 12, are in Utah.