Brent Gisler’s fingers flip through rows of vinyl as he searches for his next buy. He picks up an album for a closer look, bobbing his head to the music playing overhead. Gisler has been a regular at Randy’s Records for the past 30 years, but lately he’s been joined by lots of new faces looking to find out what vinyl is all about.

Over the past four years vinyl sales have skyrocketed while other parts of the music industry have suffered. Many claim vinyl has a better sound while others simply enjoy the experience of it. With limited production and the rise of streaming, music lovers wonder if the vinyl revival is here to stay.

“I hope the trend keeps going, but I don’t know if it will,” said Chris Copelin, manager at Randy’s Records in Salt Lake City. ”We keep on seeing new people all the time though so I keep on hoping that it will.”

Music in a digital world

Last year marked a shift between the majority of people actually buying music and streaming it. According to the 2014 Nielsen Music Report, Americans streamed 164 billion songs last year, up from 106 billion in 2013. But not all people in the music industry think that’s a good thing.

“The problem with streaming is that listeners start developing really short attention spans,” said producer Andrew Goldring, owner of Soundcave Productions in Salt Lake City. “It gives people more chances to skip and not really pay attention to what they’re listening to.”

With 9.2 million albums sold last year, vinyl sales grew nearly 52 percent from 2013. Although it still only accounts for 6 percent of album sales, vinyl and streaming are the only parts of the music industry where sales are actually growing. Vinyl sales were 53 percent higher the first three months of this year than the first three of last year, according to a recent Nielsen report.

Vinyl is the whole package 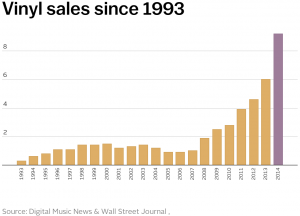 Kay Taylor is one of the new faces at Randy’s Records. She started buying vinyl when she got a record player for Christmas last year. “I think it’s awesome vinyl is becoming more trendy because it makes music more available,” Taylor said. “There are things I wish I would have bought 15 years ago and now they’re being re-released because it’s popular.”

While some buyers simply find it fun to shop for records, others prefer the sound of vinyl to other formats. “There’s a different sound without a doubt, especially when you’re talking about old analog records,” Copelin said. “If you listen to a Beatles record compared to a Beatles MP3 there’s a huge difference.”

The sound may be different between old vinyl and new digital, but most bands today use digital sound files to make their vinyl. For many, it’s simply the physical aspect of the vinyl record that keeps them coming back.

“I like the action of vinyl; the touch and the feel,” Gisler said. “I’d rather listen to an entire album rather than just a song. I want to put on an album, hear the side and then flip it.”

Many bands are taking the extra financial and production steps to release on vinyl. Goldring is currently working on an album he plans to release on vinyl. “It’s a smart move for bands because it offers a product that you can sell to your audience,” he said. “It’s a physical product that forces them to sit down, listen all the way through your record and really experience what you are trying to convey.”

Let them have vinyl 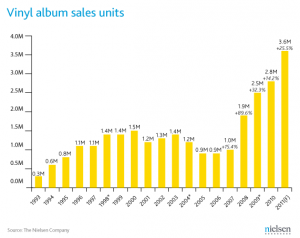 Copelin said she is excited about the surge of new customers, even if it means she doesn’t get to know all of them. “It has it’s pluses and minuses,” she said. “A huge plus is just more people listening to records. They’re finding out what’s fun about it and discovering the huge difference between shopping for records and just downloading music.”

Vinyl pressing plants are doing their best to keep up with increasing demand for records. Nashville United Record Pressing is one of only 20 pressing plants in the U.S. and it is constantly busy.

“We’ve been running 24 hours a day, six days a week nonstop for quite a while now,” said Jay Millar, United’s director of marketing in an interview with Billboard magazine. “It used to be a situation where we’d ramp up like that before Record Store Day and Black Friday, but it has gotten to the point where there really is no slow time.”

The vinyl revival doesn’t show any signs of stopping, but with over-worked plants and old machinery there’s a cap as to how far it can go. Still, many music lovers remain optimistic that vinyl will stick around. “I think if people embrace the technology again and companies are willing to invest in building new equipment, then vinyl will probably survive for a while longer,” Goldring said.

Regardless of what happens, Gisler and many other vinyl lovers will continue to flip through the rows of records as long as they can.