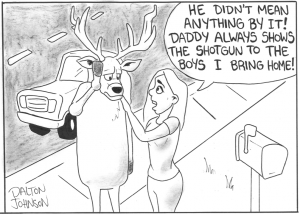 Getting married is a joy-filled experience. With that joy come the dreaded in-laws, but newlyweds might not have as much to fear regarding in-laws as they initially think.

“Meeting in-laws shouldn’t really be any different than when you meet anyone else,” said Brian Willoughby, professor of family studies at BYU. “It’s important to remember that they’re different people, they have different beliefs.”

Willoughby added that in-laws typically have a bad reputation based on stories heard from others. “People tend to share bad or extreme stories,” Willoughby said.

He also mentioned that the horrors of in-laws are perpetuated through the media — movies and television shows often portray in-laws in a negative light.

Willoughby said as newlyweds adjust to their new life together, they create distance from their parents. “There is going to be some tension from both people’s parts,” Willoughby said. He explained that it’s important not to get offended, as the parents of your spouse are adjusting to the newly created distance between them and their child.

Olivia Snow, a junior studying English, married Aaron Snow in May. She said she felt especially nervous when meeting his parents for the first time, which was only a week after they started dating.

“Aaron almost over-prepared me to meet them. He said things like, ‘Don’t be too funny, because my dad’s the funny guy,'” Snow said. She added that she even tried on a couple different outfits before meeting her husband’s parents.

Snow mentioned that she had heard a lot of horror stories about in-laws before she was married. “I took a marriage and family class here at BYU. There was a whole chapter on in-laws,” Snow said.

She also said the professor explained that mother-in-laws would likely always have tension toward their sons’ wives, which made Snow even more nervous about in-laws.

Aaron Snow, a geography major, said he felt most nervous about meeting Olivia’s dad. “It was mostly because her parents aren’t LDS,” Aaron Snow said. “I was worried they would think I’m just some tall, gawky Mormon kid who liked their daughter.”

Both Aaron and Olivia Snow agreed that in their transition as a newly married couple, they have changed what they share with their parents. “Now you’re dependent on your spouse, not your parents,” Olivia Snow said.

She added that to help build the relationship with her in-laws, she tries to get involved in things that they are interested in. She said that sometimes this means getting out of her comfort zone but that it is worth it because it helps her get to know them better.

Aaron Snow explained that they only say certain things to their parents, always emphasizing the positive. “If there is something to work out, it is between her (Olivia) and I,” he said.