Nearly 150 students and 13 teachers survived the detonation of a bomb at Cokeville Elementary school in Wyoming on May 16, 1986.

Doris and David Young lured the entire student body and teachers into one room. After holding them hostage with guns and bombs for two hours, the bombs exploded, but only Doris and David Young were killed. Everyone else escaped alive. Days later, children began telling stories about being rescued by people dressed in white who protected them, leading people to refer to the event as “The Cokeville Miracle.”

Today the memories of those survivors is being told through a new film “The Cokeville Miracle.” The film premiiered on March 7 at the LDS film festival and will be released in theatres on June 5.

Kam Wixom, a survivor of the crisis, watched his children as extras in the film. In the filming of one particular scene, Wixom watched the horror on his son’s face as a gun was drawn.

“It killed me almost to watch my son as the gun was pulled,” he said.

Wixom said he went home that night and contemplated whether or not it was OK to expose his children to such traumatic events, but he knew “the good parts will be powerful.”

“I had to go through hell again to understand the miracle … but my children were able to see what I went through,” Wixom said.

T.C. Christensen, director of “The Cokeville Miracle,“ echoed the same sentiment when he said, “the good messages are worth it.”

When Christensen heard the story seven years ago he knew he wanted to tell this miraculous story. “The story and events gestated for years until it burst out,” he said.

He explained that although there are still miracles today, it’s not like the stuff from the olden days. Christensen believes that “God is in our lives, expecially when we call on him.”

Christensen talked about the application of the story, saying people have things, other people or events pushing against. “This is a story of perseverance. They did things that created freedom, and I can relate to that,” Christensen said. 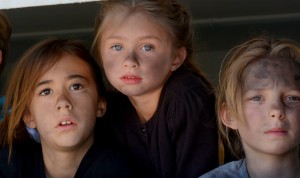 Christensen said finding a place to film “The Cokeville Miracle” was a challenge. Specific features of the elementary school were crucial to the story. Christensen needed windows that opened in the classroom where the bomb detonated, two entrances and a bathroom that hooked to the room. Upon further reflection, Christensen realized his own elementary school fit the criteria, creating personal ties from his life and the story.

Both Christensen and Wixom had the same vision in mind as they crafted the film together. Wixom shareed his experience with his children, passing the miracle on to the next generation. “I hope people can see God’s hand in Cokeville and see that there was intervention and maybe this can be a part of their life too,” Christensen said.

To promote the idea of seeing miracles from generation to generation “The Cokeville Miracle” crew is participating in a “day of digital silence” on May 16, the anniversary of the bombing.

Christensen said people will be turning off digital devices and spend time with their families.