The sea of men in the Clyde Building auditorium is interrupted by a single pony tail, hidden quietly at the back.

Civil engineering, computer science and nursing are a few of the majors with the largest gender minority. Men and women find themselves in class largely outnumbered by the opposite gender. Although faced with stereotypes each day, many of these students say being part of the minority is beneficial and will lead them to the careers they desire. 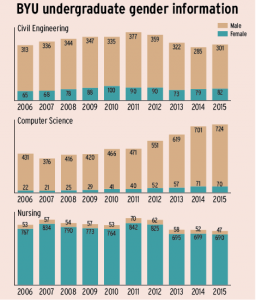 “I have found that I get a lot more opportunities and job offers and people that want to talk to me more than my friends and peers that are male, just because they are looking for that variety,” Mooney said.

Mooney recently spoke with a woman in the engineering field and learned that having a female dynamic in a male dominated field is helpful because it brings balance to the field. Josh Curtis is a junior from Parowan, Utah, studying civil engineering who loves the perspective women bring to the major.

“It’s nice to not just have a whole bunch of guys,” Curtis said. “Women can have a different perspective, and they think about things differently. It is good to have the variety.” Curtis believes the women in civil engineering are smart, hard-working and just as capable as the men in the major.

Mooney chose to be an engineering major because she loves math and problem-solving. When she tells people her major many are surprised and tell her she must be really smart, because it is considered a hard major.

“Even though it is hard, you honestly don’t need to get A’s to graduate. You are here to learn; you are not here to be perfect,” Mooney said. “People would probably be surprised at what my GPA actually is, because it is not that good. I’m not as smart as people think I am, just because I say that I am a civil engineering major.”

Mooney said many of the comments given by guest speakers and in lectures are geared toward men, and the jokes are statements that mainly men would find funny.

“Sometimes they will go, ‘Oh, and the women,’ and I will just be like, ‘Yep, I am here,'” Mooney said. “I think it is funny; I could care less about it because I love what I am doing.”

“It was me, four other girls and then tons of guys, and they all acted like they had been programming since they were born,” Sumsion said. “I just thought, ‘Oh my goodness, I am so out of my league here.'”

“You just don’t hear about them,” Davis said. “It is not like when a woman walks into a computer science class anyone thinks, ‘Oh, they’re going to mess it up.’ It’s more just like they just don’t exist.”

Sumison agreed that having more women would boost the computer science field as a whole and believes the actual name keeps women away from the field.

In the BYU nursing program, it is not the women who make up a minority, but the men. Men comprise only 6.3 percent of all BYU nursing students today, which is a slight decrease from 6.5 percent in 2006. Senior Ashlyn Cahoon, from Tooele, Utah, is a nursing major and said most people expect the male students to go on to graduate school.

“A lot of the time people ask, ‘What are you doing after?’ nursing is never a good enough spot for them; it has to be, ‘I’m going to be a nurse and an anesthesiologist,’ or a nurse practitioner, and then it is acceptable,” Cahoon said.

Deven Jennings, a nursing major from Oregon, said he agreed with that stereotype.

“I guess I fall into that stereotype. I see nursing as an avenue to get a DMP, which is a doctor in nursing, and ultimately become a family nurse practitioner,” Jennings said. “However, there are definitely guys in the major who are looking forward to being a nurse, which is just fine.”

Jennings said it would be a lie to say that society doesn’t see nursing as a prominently female field, but modern health care is pushing to change that view.

“Modern health care has really pushed that men and women can fulfill all aspects of health care regardless of whether it is males or females in nursing, or males and females as doctors,” Jennings said. “Especially for men in nursing, I really do feel like there is a belief that only women have the capability of expressing compassion, which is completely not true. Men and women both have that capability.”

Despite persistent stereotypes in these majors, these students choose to do what they love.

“I think it would be stupid to allow stereotypes to dictate my choices,” Mooney said. “I am doing what I love, and that is what matters.”

The Church releases a statement on the importance of water conservation