BYU’s Kyle Collinsworth has enjoyed the season of his college career this year, making NCAA history when he earned his sixth career triple-double. Collinsworth tied basketball legends Michael Anderson, of Drexel University, and Shaquille O’Neal, of Louisiana State University, but surpassed them by achieving all six triple-doubles in a single-season.

Collinsworth broke the NCAA single-season triple-double record in a March 10 game against Portland, held during the NCAA Tournament in Las Vegas.

Collinsworth tore his ACL during the 2014 NCAA Tournament and sat out the remainder of the season. He received ACL surgery during the off-season before returning to team practices for the 2014–2015 season in hopes of getting some playing time. No one expected he would make the comeback he did.

“Watching Kyle get all those triple doubles has been amazing. What’s fun is everybody in the arena seems to know when he gets close to another triple double,” said Chad Burton, vice president of the BYU ROC. “You can feel the energy rise as he gets close, and even in blowouts everyone was glued to their seats. In Vegas, he had nine points and over 10 rebounds and assists. The entire arena started chanting ‘one more point.’ Honestly, that might have been the highlight of the season. When he tied the record in Vegas the arena went crazy.”

Collinsworth’s skills have developed triumphantly over the season with his return from ACL surgery.

“Everybody was yelling, all the BYU fans were yelling while I was shooting it, so it was good. I’m glad (the ball) went in,” Collinsworth said in an interview with BYU’s Sugene Lee after recording his sixth triple-double on March 10.

Collinsworth’s hard work has not gone unnoticed by the sports nation. Since achieving his sixth triple-double, Collinsworth has been compared to many, current and past, college basketball athletes. One of the starkest comparisons has been to retired NBA player Shaquille O’Neal.

O’Neal played for Louisiana State University from 1989 to 1992 and is quite the specimen compared to Collinsworth. 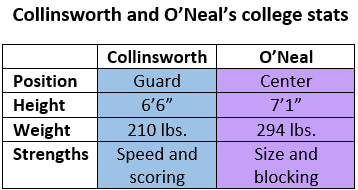 Collinsworth is a well-modeled college athlete and  is above average height for a college guard (6’6″), but if he was faced with the obstacle of O’Neal he might face some challenges on the court.

O’Neal measured above average for a center (7’1″), who tends to be the tallest player on the court, which gave him an advantage. His size and build alone made him a force to be reckoned with on the court.

O’Neal’s philosophy and skill set flourished off of his size, exhibited through his ease to “Shaq Slam” (slam dunk) the ball and to block shots that tried to find their way toward the hoop, earning him the name “Shot Blocker.”

O’Neal was also mentored by legendary Bill Walton, of the Portland Trail Blazers, and Magic Johnson, of the Los Angeles Lakers, while at Louisiana State University. These legendary mentors helped O’Neal enhance his skills by teaching him to use his physical traits to his advantage on the court.

An advantage Collinsworth would have over the monstrous O’Neal is his speed. Collinsworth is light on his feet and has developed good ball-handling skills that have aided him during games, especially this season. 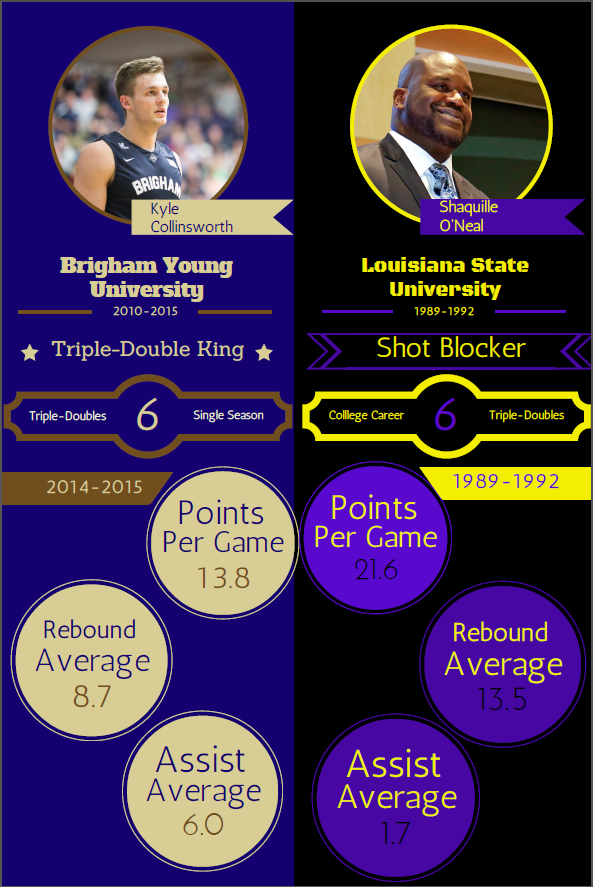 It is hard to crown who is the better player simply by comparing stats and trying to look at physical presentation, especially since they play different positions.

Collinsworth and O’Neal’s finesse and talent have been used to their advantage on the court and have given them record-setting careers. These phenomenal players bring so much positive attention to their sport and have given sports fans a real reason to rise and shout.

“I’m just in awe that (Kyle Collinsworth) has had this kind of a season,” Cameron Starr, a devoted BYU sports fan who has attended almost every game this season, said. “As a spectator, every game has been exciting to watch. Whether he skies for a rebound, makes the extra pass or gets to the rim, it seems inevitable that he is going put up a great stat line every game simply because of how he plays basketball. Regardless of how teams have tried to defend or scheme against him, Collinsworth continued to play his game and be successful. It’s been phenomenal to witness.”

It is a great time to be a BYU sports fan.

Collinsworth just ended his junior year, so chances are he will add more triple-doubles to the list and break the record by the time he graduates from BYU.