BYU volleyball player Alexa Gray has been instrumental in the Cougars’ success her entire career, was announced player of the year in 2014 and is a convert to The Church of Jesus Christ of Latter-day Saints.

In 2008 she was in a car accident with her sister and her mother. The car collided with an elk on the road, and the car rolled to the side. The driver’s side was more damaged and left Alexa’s mother injured and trapped. She died on the scene.

Gray and her sister moved to live with their aunt and uncle, and after about a year living with her Mormon relatives, she opted to take the missionary discussions and get some of the answers she had been looking for.

One of the things that most appealed to her about the gospel was the knowledge it provided about eternal families and happiness.

“The idea of an eternal family was what appealed most to me,” Gray said. “We wanted answers about why such tragic things would happen to her.”

The religious influence in Gray’s life has made a great impact on her athletic capabilities. Her knowledge of the gospel has helped her in her athletic pursuits. During disappointing times it has allowed her to have a greater perspective and meaning.

Brigham Young University is known for its religious affiliation with The Church of Jesus Christ of Latter-day Saints. They are also known for their athletic program.

But athletics and religion have more in common than one might expect.

The positive effects of religion in BYU’s athletic program are a big part of what makes it so great. BYU has been acknowledged for its outstanding values and their impact on their athletic programs.

Athletes acknowledge that the “blessings” seem to be quite literal when it comes to putting God first, even in athletics, and although they include more than 10 NCAA titles and a large amount of success, there seem to be even more valuable blessings.

Chad Sorensen is a swimmer and an active member of the LDS church. Sorensen has been able to work with a couple of coaches in Texas, and they can “see the difference that going to BYU and on a mission has made” for him.

“You can work to succeed in athletics and keep God in your life,” Sorensen said. “It’s OK to not be perfect, but we should still try to live life, be happy and work hard.”

Sorensen does all he can to put God first while still succeeding in the athletic program at BYU.

In spite of the fact that 98.7 percent of BYU’s population considers themselves LDS, 1.3 percent of the non-LDS population represents more than 25 faiths. 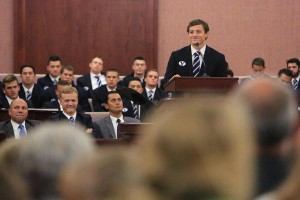 BYU swimmer Vanessa Moffatt is an active Catholic. She realized that the teammates on her summer leagues were particularly nice people and then later realized there were several Mormons on her team. The nice environment called her attention, and that’s how she first came to found out about the LDS church.

At first BYU wasn’t on her list of possible universities or swim teams. It was known as the “Mormon school.” But as she looked at schools in nearby areas of Utah, BYU contacted her, and she accepted the offer to swim here.

Moffatt specifically noticed the kindness and consideration represented by BYU athletics in spite of competition or rivalries.

“People around here all have the same morals and values as me,” Moffatt said. “It’s a nice environment.”

Moffatt isn’t the only member of another faith who has enjoyed the environment of BYU, or the morals of the LDS religion.

Andrey Goryachkov from St. Petersburg wanted to get an education and play tennis at the same time. BYU offered him everything he wanted. He is Russian Orthodox.

“I felt comfortable, even at home here at BYU,” Goryachkov said. “Honestly, I feel like I’m part of a family here. We are always trying to spend as much time together as possible, and religion helps gather us together.”

LDS or not, religious affiliations are helping the athletes to be better. BYU’s athletes are always striving to work together, be kind and positively represent who they are.

BYU’s honor code may be strict in the eyes of many, but BYU athletes know that it’s a great way to keep focused and be smart.

“The honor code is good,” Goryachkov said. “It affects me in a good way, and I like it.”

Some students come to BYU affiliated with other religions and later change their association.

Francis Sargeant came to Provo as a freshman four years ago as a tennis player from England who was associated with the Church of England, which is not BYU’s most common demographic. His transition was smoother than would be expected, partly because of similar religious values and the ‘kind environment’ of BYU.

“I liked the moral aspect of the church and what it teaches,” Sargeant said. “A lot of the time people suspect that it is culture shock, and it is, but the community and BYU’s environment is really inviting, I was able to make friends really quickly, and everyone was nice to me.”

Sargeant explained that everyone was open to answering any questions he seemed to have. The coaches and friends were a great support, but there was one friend that really made an impact.

“I had one friend in particular who sat me down and talked to me,” Sargeant said. “He helped me progress in the church and in my testimony.”

He also explained that for those who aren’t members of the LDS church, it can be intimidating to be in an environment of so many people pertaining to another religion.

“Most of the guys on the team aren’t members of the LDS church, but several associate with one religion or another,” Sargeant said.

But he sees things from a new perspective now, as he joined the church last summer. He has realized he has a beneficial role on the team as a leader and a member of the church. He strives to help the team realize how valuable God is in their athletic careers through his example and support. Sargeant said two reasons motivated his decision – the first was that he found happiness in the church, and the second involved having an eternal perspective.

BYU is known for a very clear honor code, and athletic department is known for enforcing it. BYU’s athletic program is very in line with what the church represents, and it shows.  Add personal values that include a lack of training, practice or play on Sunday, and the program becomes something very different from the worldly norm.

Being a part of the majority can be useful when trying to help or raise awareness. It can be even easier as an athlete, and in the spotlight.

BYU football player Devin Mahina uses this spotlight to enlighten the student population about the LDS religion with firesides before each game. These firesides have been held throughout the football season since 2005 when the Cougars traveled to New Mexico.

“The opportunity to represent BYU, and represent the church as well is what is most important,” Mahina said. “If you want a good experience and a good atmosphere, as well as good football, it’s the place to be.”

During the firesides team members share spiritual thoughts and musical numbers, all done the night before road games in LDS meeting houses near the game sites. It is an open attendance event; anyone and everyone is invited, allowing people to ask questions and learn more about the religious aspect of BYU’s athletics.

“The firesides have been a way for us to make a very clear statement of what our priorities are, or should be,” head Coach Bronco Mendenhall said. “Football is simply the vehicle we use to help others come to a knowledge of what really brings joy and happiness to our lives.These firesides are a way for all of us to help consider our priorities through understanding the purpose of life.”