UVU director of athletics Vince Otoupal introduced Pope to a crowd at the Student Life and Wellness Center.

“We’ve been on a great trajectory,” Otoupal said. “And now we’re going to take it even further and even higher. Today it’s a great day to be a Wolverine. We had an exhaustive search process.”

Otoupal said the interview process was full of enthusiasm from Pope about taking UVU to the NCAA Tournament in the future. 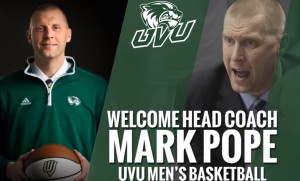 “I could not be more excited to be the new head coach at Utah Valley University. This is going to be a really special time and a special run. This place is extraordinary. I’ve played and coached at universities all across the country. I’ve never been at a place like this,” Pope said.

As a player Pope won the 1996 NCAA Men’s national championship at the University of Kentucky. Pope also played in the NBA for the Milwaukee Bucks, the New York Knicks and the Denver Nuggets.