In this contest, The Universe competes with other non-daily newspaper-based news outlets in Utah for work published in 2014. Entrants include professional and student publications, and the contest recognizes work in their print and digital editions.

The Universe is a laboratory news organization in BYU’s School of Communications that has online and mobile news products and a weekly print edition that circulates on the BYU campus in Provo. 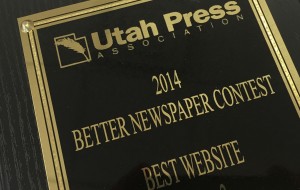 The Universe broke the story online, and additional reporters joined in to build the award-winning package published in The Universe’s print edition under the headline “BYU student sought in meth lab says ‘the news has it wrong.’” Other reporters on the team included Donovan Baltich, Erica Palmer and Justin Romney. Reporter Brooke Weenig contributed a sidebar story, “Meth 101.”

Judges called it “Nice investigative reporting” and applauded the reporters for identifying the suspect. “Good effort by reporting team to cover several different angles for this breaking news piece.”

Reporter Sam Petersen crafted a three-part series on the effects of pornography addiction that grew to five parts by the time the entire series was published. Joining him in the project was reporter Madeleine Hettinger. “This series addresses a very powerful subject and does it well in covering faceted sides of the issue,” judges said, giving the reporting duo first-place recognition for Best Feature Series.

Recognition for Best Sports Page included The Universe’s Olympics edition in February, which featured stories by reporters Katie Nielson, Annie Nelson and Michael Shaw; and the Nov. 4 and 11 editions. The Nov. 4 edition featured a BYU basketball preview compiled by reporter Alex Clark and designer Makenzie Jamias and a player profile by Alex Johnson. The Nov. 11 edition featured an informational graphic on BYU football team injuries designed in the style of the board game “Operation.” Reporters Katie Nielson and Trent Christiansen and designers Seth Prestwich and Makenzie Jamias collaborated on the project. The page also features a profile on BYU and NFL football player Chad Lewis that was written by reporter Alex Olpin.

Reporters Joshua Jamias and Erica Palmer claimed a third-place award in the Best General News Story category for “Preparation and mindset key to active shooter survival on campus,” which judges called an “easy to follow” informative piece on a timely subject.