Nobody could catch a Hollywood serial rapist. The man would climb out a window and disappear into the night as soon as police arrived.

Everything changed when Officer Carl Whiting positioned his team on rooftops to catch the man in time. The next time he struck, Whiting’s team spotted him fleeing down the street below. Whiting pursued him, tackled him to the ground and arrested him.

Whiting, who now works as a BYU police officer, is taken aback when students tell him, “You guys aren’t really cops.” Whiting responds, “Twenty-six years in Los Angeles doesn’t qualify me to be a real police officer?”

Whiting has worked as a supervisor over a homicide squad, a patrol officer in downtown L.A. and a detective for Hollywood sex crimes. He worked child abuse cases, headed up criminal units, has put away gang members, pimps and rapists, was drafted in the Army and served an LDS mission in Argentina, all before coming to BYU.

Whiting is known as the “bike cop” around campus. Responding to calls, patrolling the crosswalks and working class break are a few of Whiting’s main duties. But his bike, mustache and dedication to safety are how many students recognize him. “All the negative things you’ve heard about the bike cop, that was those other guys,” Whiting joked.

Keeping campus safe is no joke for Whiting. “A lot of people have fear of (an) active shooter situation on campus,” Whiting said. “In reality the biggest danger is traffic — especially the crosswalk.”

Whiting recounted several avoidable deaths that happened in the crosswalks on and around campus. A ticket for jaywalking might frustrate students, but there is a reason behind it. “I don’t want to be the bad guy; I want to be the good guy and make sure everyone is safe,” Whiting said.

There is a misconception on campus about BYU police officers’ status, according to Whiting and BYU Lt. Chris Autry.

The officers at the BYU Police Department have a cumulative total of 377 years of experience outside of BYU. They are certified with the state and have full authority to stop suspicious activity, investigate, cite and arrest on and off campus.

City police departments often request BYU’s officers for backup, and for good reason. They are talented, well trained and dedicated, according to Whiting. BYU’s police department is made up of former SWAT team members, detectives, sergeants, Army veterans and special unit members who tracked down fugitives and drug traffickers. “The BYU Police Department is respected. Officers want to come here,” Whiting said.

Autry said Whiting’s experience as a police officer in LA has made him a role model for the BYU police department. “We look for the absolute best officers, and Whiting is one of those officers,” Autry said. “He has seen a lot; he’s a tough cop.”

Whiting worked several different positions in LA. He loved his job, whether it was as a patrol officer, field sergeant or detective. “It was a burden to take a day off, because there was always something going on, such an adrenaline rush,” Whiting said.

He once led a criminal unit and achieved the highest clearance rate in LA. When he worked to suppress prostitution, he focused on finding the pimps. Whiting helped victims to safety during an infamous Hollywood shoot-out. “There were a lot of drugs and a lot of guns,” he recalled.

Whiting and his family moved to Utah after he retired. He has now worked at BYU for 11 years and still enjoys it. “BYU Police work together. They are experienced, and they are caring,” wife Lorna Whiting said. “They would put their lives on the line; if a student needs help, they are going to get it.”

Whiting feels blessed with good health and enjoys the bike because it allows him to be more involved and take action when needed. “Everyone knows the old guy on the bike, and I love being able to tell them that (Whiting) is one of the greatest guys you’ll ever meet,” Autry said. 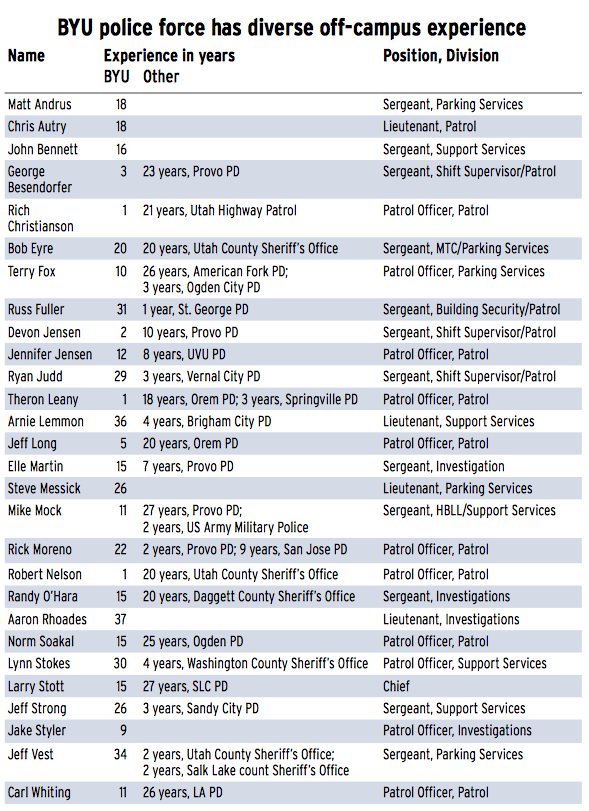 Office of Belonging opens its doors: new curriculum and a student council