House and Senate leaders were unable to make a compromise on Medicaid expansion leaving 100,000 Utahns still without health insurance. 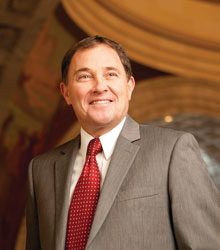 The governor set a deadline of July 31 for the task force to come out with a plan. Once the task force has a plan, he will then call a special session to discuss and debate the bill. Herbert compared their efforts to a football game where a team is at the 20 yard line and only needs a little more time to reach the end zone.

Healthy Utah would cover people by creating an exchange where they can buy subsidized insurance. House leadership objected to Healthy Utah citing uncertainty about how long the federal government would continue to pay 90 percent of the cost of care. They also expressed concern about King v. Burwell, a pending U.S. Supreme Court case that challenges aspects of the Affordable Care Act.

The Dunnigan plan, “Utah Cares,” would expand Medicaid for about 22,000 Utahns. His plan would also cover everyone else on the Primary Care Network, a basic plan that doesn’t cover hospitalizations or specialty care.

Critics said Dunnigan’s plan fails to provide adequate care. Under Utah Cares, once someone gets hurt or sick and needs long term treatment the plan will no longer provide coverage, leaving many people in dire need of care, said Rylee Curtis, Medicaid Policy Advisor for the Utah Health Policy Project.

Maryann Martindale, executive director of Alliance For A Better Utah, said she was grateful that they didn’t kill Medicaid expansion when the session ended. However, she expressed concern about the lack of Democrats on the task force, and she was concerned that the deal would be made without public input.

“This seems like it’s just being taken into a closed GOP caucus decision,” she said.

Gov. Herbert said that he has had ongoing discussions with legislative democrats, but he just wanted the leadership and the sponsors on the committee. Still, he insisted that he would continue discussion with the minority leadership.

Rep. Rebecca Chavez- Houck, D-Salt Lake City, said she was frustrated that the Democrats were cut out, despite having been involved in every step of the process thus far.

“It says to our constituents that there’s a portion of you who’s voice doesn’t deserve to be heard,” Chavez-Houck said. Currently, the Democratic caucus is not willing to go lower than Healthy Utah. However, it would be easier to get them on board with a bill that “marries” the two plans if they were involved in the discussions, she said.

Speaker Hughes admitted that given the large numbers of Republicans it may be hard to get everyone on board. However, at the beginning of the session a majority of Republicans were opposed to Medicaid expansion, which shows that the Republicans have been willing to move from their position, he said.