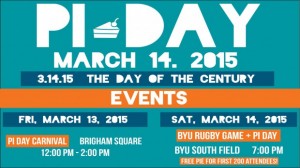 Pi Day this year is a once-in-a-century numerical phenomena: the date falls in sequential order of the first five digits of pi: 3/14/15.

Because of this once-in-a-lifetime event, The BYU Department of Mathematics is starting early on the celebrations. The first event will be a carnival March 13 from noon to 2:00 p.m. in Brigham Square. Games, activities and booths will be available to the student body.

The highlight of the carnival will be the opportunity for students to throw pies at professors, BYU rugby team members and volunteer community members. The theme for this year is “Pi the People,” according to the department’s website.

On March 14, the Department of Mathematics is teaming up with the BYU Rugby team to support its match against St. Mary’s College at 7:00 p.m. Tickets are $5 for students and $8 for general adult admission. Free pie will be handed out to the first 200 attendees.

March 14 has been celebrated as Pi Day for many years, but in 2009 the U.S. House of Representatives officially recognized this day as National Pi Day. Many will celebrate at 9:26:53 a.m. in continuation of the series of numbers: 3.141592653.

Even if students can’t attend these events, there are other things they can do to celebrate Pi Day.

“I love and celebrate Pi Day,” said Danny Durrant, a junior from Mesa, Arizona. “I have a pie shirt that I wear, and when I was home, we would make a cake in the shape of the pi symbol.”

Others like Durrant have their own Pi Day traditions. People in Princeton, New Jersey, hold recitation and pie-eating contests. Albert Einstein’s birthday is on Pi Day, which the San Francisco Exploratorium celebrates.

For Pi Day 2015, get creative and find a way to celebrate, whether that means going for a 3.14-mile run or making as many different kinds of pies imaginable. Share your Pi Day experiences on Twitter, and tag @UniverseBYU.