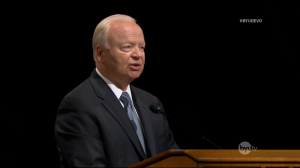 Elder Kent F. Richards, of the Seventy, addressed BYU students on following the Savior’s example as a pattern for happiness and success March 10.

Elder Richards told a story of a man arriving home from work to find a little girl who was lost and scared. After the man and his wife comforted the child, the man asked her if she was frightened. The child said she was frightened until she saw the picture of Jesus hanging on their wall.

Elder Richards related the little girl to BYU students. “At times you may feel that you are sitting on the curb, lost and afraid, but if you will look to the Savior, He will guide you safely home. He is the one infallible source of help for each of us,” Elder Richards said.

Elder Richards said Heavenly Father gave his son so students can learn of him, follow him and have faith in him.

“Because of his enabling Atonement, we can grow, repent and do what is necessary to invite the fulness of Heavenly Father’s blessings. To have it work in our lives, we must act; we must stand up from the curb and follow him,” Elder Richards said.

He continued to speak about each student’s personal path. He cautioned against comparing personal progress to what others are doing or have achieved.

“Your path is unique to you. Only you can receive heavenly guidance to pursue your path. If you choose to take detours, then you and only you can find your way back,” Elder Richards said.

Elder Richards said Christ understands and is personally aware of every decision, question, hope, dream and need, the intents of one’s heart and every temptation that each student faces. He told students that these are key years that are vitally important in their eternal life.

“No longer are they just preparatory years for your future. They are your future. Of course you will continue to grow, but the ‘now’ of your young adult years is foundational to your divine destiny as an heir of eternal life,” Elder Richards said.

Elder Richards invited students to look carefully at Christ’s own young adult years to find patterns that will help them answer the “why”s, “what”s and “how”s of life. He outlined four things Christ himself did in his formative years.

1. Christ learned through his own experiences.

Elder Richards said Christ had all power, all knowledge and held the keys from his father for the salvation of all of Heavenly Father’s children; yet he did not possess the fullness at first. He said God the Son had to learn some things in mortality that he could not have known otherwise.

“This completeness for (Christ) came after his years of preparation — at the age of 30 as he was about to begin His ministry. These 30 years — his formative young adult years — were to teach him the things he personally needed to understand by experience,” Elder Richards said.

Elder Richards asked students if they could identify their own learning of eternal principles through their daily experiences. He asked if students were filling their souls to be more complete men and women of Christ.

“You may not even recognize the significance of little day-to-day choices that you make today until late in life, as you see the unfolding of consequences of your choices today,” Elder Richards said.

Elder Richards said Christ learned and waxed strong while growing up with his brethren. Christ applied celestial attributes that he later taught. He said Christ’s test was different from ours; his was not a test of faith but of constant perfection in an imperfect world.

“Your growth is personal and comes from within,” Elder Richards said. “You are defined by how you discover your own path and then overcome all of the obstacles that seem to make it hard to progress.”

Encouraging students, Elder Richards said Heavenly Father knows their needs and knows their future. He testified from experience that he knows the Father sends sustaining blessings as they strive to do their best.

“Hard has always been part of the formula. Hard seems to be required for growth,” Elder Richards said. “The Savior learned and suffered through personal, deep, searing contradictions and indignities, which he humbly allowed.”

3. Christ waited upon the Lord for the time of his ministry to come.

Elder Richards said Christ did nothing but the will of his Father. Christ waited for his Father’s will and then fulfilled it perfectly.

He then related it to students and said that each person comes to learn the Father’s will and timing. “All things work together for good in them that love God. If there was great purpose in Christ’s waiting upon the Lord during his young years, there must be a vital need for you also,” Elder Richards said.

Elder Richards said faithful, patient waiting implies that we strive daily to do the little things: “Daily scriptures no matter our schedules, daily prayers with hearts drawn out always, daily worthiness for the companionship of the Holy Ghost and daily diligence to keep the environment fit for the Spirit.”

He questioned students’ commitment to qualify for life’s work. He asked students, “When does your ministry begin?” He said to wax strong, increase, grow and prepare every day to be ready for the next choice or learning experience.

“You must learn now, my dear young friends, to become unselfish so that you can be happy in marriage and family and life. As you genuinely serve others now you will be more able to give of yourself eternally to your spouse and to your children,” Elder Richards said.

He told students to learn to look outside of themselves. He promised students if they do, they will open unending possibilities of joy and happiness and will come to know even more personally the Father’s gifts to them.

4. Christ made covenants and received ordinances.

“Like each of us, Christ began with baptism and receiving the gift of the Holy Ghost. The ordinances are the greatest eternal privilege that the Lord has made available to us in mortality,” Elder Richards said.

He encouraged every student to hold a current temple recommend, either a limited-use recommend or a full recommend. “Your bishop is there to guide you and help you to qualify yourself. Holding a recommend, you can use it regularly and frequently,” Elder Richards said.

He addressed the concerns about the sacrifices students make to attend the temple. “Going to the temple involves a plan, a little sacrifice and even some opposition,” Elder Richards said. “Sometimes the baptistry is crowded or the sessions full. You might have to wait longer than you hoped, but the spiritual power, revelatory help and inspired insights will come no matter the details of your temple worship.”

He admonished students to come to the temple for the living water, to do their best, and that the Lord will honor their efforts.

Elder Richards concluded by saying students have to look to Christ for guidance. Christ learned, increased and waited upon the Lord. He made covenants and received ordinances.

“You, too, can learn through experiences on your own personal path,” Elder Richards said. “You, too, can increase with consistent, directional movement forward, finding happiness all along the way. You, too, can wait upon the Lord, acting with energy and faith, doing the very best you can as you watch for his timing and his ways.”

Elder Richards told students they can make covenants and receive ordinances and then strive faithfully to keep them, renew them and watch for their promised blessings.