According to its website, “the 360-person Mormon Tabernacle Choir will perform a brief medley of patriotic songs … before singing the national anthem prior to the start of the Yankees’ 7:05 p.m. game vs. Tampa Bay.”

The choir was recently inducted into the Classical Music Hall of Fame, and singing at Yankee Stadium will be another accomplishment to add to its honors.

The Yankee Stadium performance will be part of the choir’s Atlantic Coast Tour June 24–July 7. The choir will tour Bethesda, Maryland; Bethel Woods, New York; Saratoga Springs, New York and Boston. It has two performances at Carnegie Hall July 1 and 2. The last time the choir performed in New York City was 2003.

The Mormon Tabernacle Choir has performed for 10 U.S. presidents and sang at the inaugurations of Lyndon B. Johnson, Richard Nixon, Ronald Reagan, George H. W. Bush and George W. Bush. 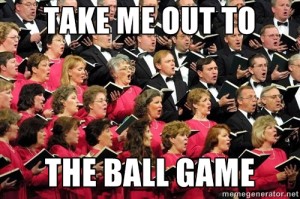