A brotherhood of BYU students constructed a time capsule inside a hollowed-out library book in 2005. The members have kept it hidden in the Harold B. Lee Library for 10 years.

Jeremy Foote, known as the “big brother” or “dictator,” said the men did not expect that 10 years later this book would still be sitting on the shelves of the BYU library. 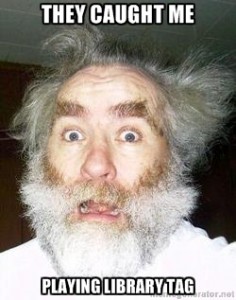 It all began a decade ago when a group of young men wanted to create a newsletter that had only one copy in circulation during their time at BYU. They devised a plan to buy a book, carve out the inside and insert the newsletter. They would assign the book its own call number in the library, which would be kept secret.

The group called itself the 5th Chapter, in reference to its book and the fact that this all took place on the fifth floor of the library.

“I remember the night we carved this out. We used an X-Acto knife, and we took turns rotating through because it was exhausting,” said Tom McConnon, one of the original members of the 5th Chapter. “It took us forever to get through that thing.”

Another original member of the group, Mac Reynolds, said the book that was supposed to be for newsletters actually turned into a type of time capsule. “I think we only wrote one newsletter, and then we just had fun with it,” he said.

More people have added items to the hollowed book through the years. Reynolds said they chose to give the book an imaginary call number so they could find it again as well as give the call number to those they wished to find it.

“Over the years these books on the fifth floor have been moved and rearranged several times, and yet our book still remains here in the catacombs of the library, never to be discovered,” said Justin Leavitt, a 5th Chapter member.

The book was originally filled with random notes and objects, such as a picture of the original members, Tic Tacs in case of emergency, a list of trustworthy teachers, a nose whistle to relieve stress during finals and a magical pencil to use for tests, Reynolds said.

One of the most important items was a list of rules to the game of library tag, including a map showing running zones and off-limit zones. The 5th Chapter bonded over games of library tag. McConnon especially enjoyed the secrecy of the game itself and making sure he stuck to the rules to avoid getting caught.

“The best part is when you’re sprinting down the aisles, and then you come to the no-running zone. You’re just sweating, and all of the sudden you have to stop. It really is the best game,” McConnon said.

Library tag is played secretively, just like most of what the 5th Chapter does, and so there is a special time to play, Reynolds said.

“Library tag is a pretty intense game when you can’t get caught,” he said. “We’d always play when the library is about to close. The music starts playing to get people to start packing up to leave. Then the lights dim halfway, and that’s when you have your most serious game.”

More people got involved with library tag, and they all enjoyed it, Reynolds said. It was something that participants were passionate about and made good memories while playing.


“It really is the most fun thing, and we take it very seriously,” McConnon said. “That is saying something, because we did inner tube water polo, wheelchair rugby, every legit sport you can think of at BYU, and library tag trumps them all.”

The contents of the book acted as a diversion from regular school activities and provided something fun to take away from the tedium of studying, Reynolds said.

Reynolds said the book represents more than just the memories of the original 5th Chapter members. “Mostly, we want others to know about this book to encourage them to enjoy the college experience and make the most of it and think outside the box,” he said.

McConnon said the 5th Chapter book symbolizes the joy that can be found even while doing school work. “BYU is a place where you have to make your own fun, and the book was just an extension of that,” he said.

Leavitt agreed that there must be a strong element of fun involved in college life. “We were just studious students who loved spending time in the library, but we made sure we had a good time doing it,” Leavitt said.

Current BYU students have the same opportunity to experience a good time, and they don’t have to cut up a book and hide it.

“It’s about finding your own way and making traditions that you can carry beyond your college experience. You see us, the 5th Chapter crew, and 10 years later here we are, together still,” McConnan said.