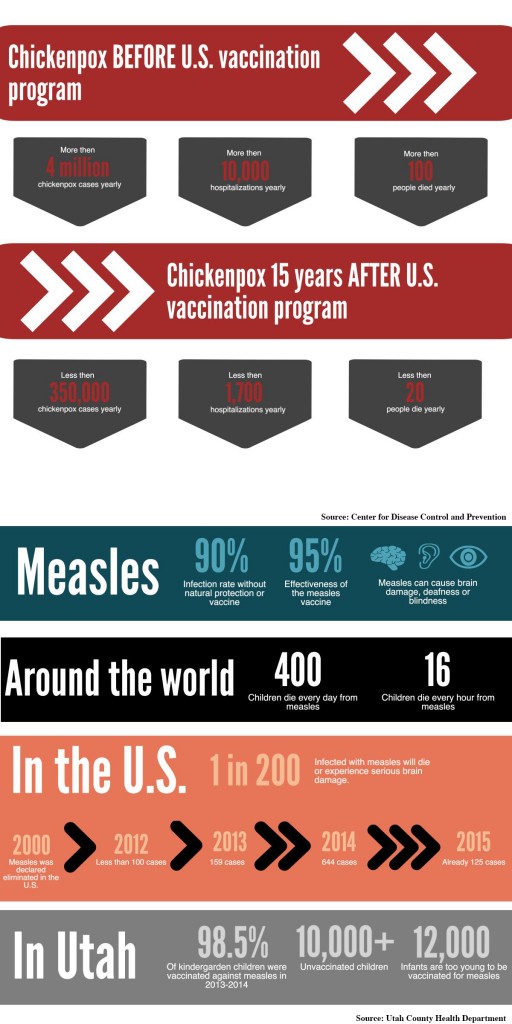 Families a century ago were considered lucky if they were able to raise all of their children. Diseases like measles, whooping cough, tetanus and meningitis used to claim the lives of millions of children.

“All it takes is a walk through an old cemetery, and you’ll see all kinds of toddler and infant graves,” said Dr. Joseph Miner, executive director of the Utah County Health Department.

Today’s vaccines help prevent these diseases, but some parents are concerned that vaccines could do more harm than good.

Jennifer Perry, a mother of three from California, has heard mixed things about vaccinating. She started doing her own research when she was pregnant with her first child. “I was nervous about not vaccinating my first son; the doctors say ‘how scary’ it is if you ‘don’t get your vaccinations,'” Perry said.

Perry started her first child on a delayed vaccination plan but refused to give him all the recommended vaccines. With her third child, “I haven’t let any chemicals enter her body.”

One of Perry’s main concerns is the ingredients used in vaccines. “It is a ridiculous amount of pathogens and toxic chemicals to give such young, growing babies,” she said.

She is not alone in her sentiment. Dr. Kevin Carter, a pediatrician at Levine Children’s Hospital, has addressed this issue with many concerned parents. “They don’t want to put something in their child that they don’t trust and is potentially toxic, which I don’t disagree with,” he said. “Vaccines are not risk free, but what we know is that they work, and the risk of vaccines is far, far less than complications from contracting one of the diseases.”

Miner said babies are exposed to thousands of viruses and bacteria just by eating and breathing. “The couple dozen shots (babies) get is nothing in comparison,” he said.

Bubba Carter, a student at Salt Lake Community College, said her brother had a seizure after receiving a routine vaccination. “He’s fine now, but after the incident my mom discontinued the vaccinations,” she said.

Perry questioned vaccines’ effectiveness after vaccinated children were reported sick in recent measles outbreaks. “The (media) wants to blame the unvaccinated children and scare everyone into getting the vaccinations,” she said.

Some vaccines are more effective than others. However, if at least 95 percent of the population is vaccinated it is hard for a disease to take hold. Measles outbreaks are particularly unusual because the measles vaccine is 95 percent effective, Miner explained.

The vaccine for whooping cough is only 60 to 80 percent effective. “Sixty percent is a whole lot better than zero, and the 40 percent (that contract whooping cough) will have a milder case. It’s not an argument at all to say it’s not worth getting it,” Miner said.

Bubba Carter doesn’t plan on having her children vaccinated after several family members experienced health issues that appeared to be vaccine related. She herself is not vaccinated and recalled having the mumps and chicken pox and recovering just fine. “Everyone gets sick; it’s just something you have to go through,” she said.

But what about the people who do die? Meningitis, another vaccine-preventable disease, will claim the lives of as many as 390 people every year. “And that’s in the U.S., where we have outstanding medical care,” Miner said.

Miner’s sister was paralyzed after contracting polio before the vaccine. “If you (saw) people suffer from polio you would never think twice against immunizing against it, and a lot of these diseases are as bad or worse,” Miner said.

Both doctors said vaccines have helped to prevent and eradicate diseases. The smallpox vaccine, for example, is no longer administered because it eliminated smallpox from the entire world. Vaccines seem less relevant today because the diseases are not as common, Kevin Carter said.

“Millions of children died before immunizations; people underestimate the beneficial impact that vaccines do have. The point is not to force people to get vaccines they don’t want; the point is to eliminate disease,” Kevin Carter said.