A Johnny Cash top hit song, “Ring of Fire,” was sold online from Slovenia to thousands, and the outraged country legend testified in favor of the Digital Millennium Copyright Act, hoping to stop this injustice from hindering other artists in the future. That was in 1997.

Seventeen years later, his daughter continued the fight and testified in the “Music Licensing Under Title 17 Part Two” hearing last June. Rosanne Cash argued against the recent development of music subscription websites that allow users to pay a small monthly fee for unlimited access to an artist’s music.

Subscription websites infiltrate the music world as popular services like Spotify and Grooveshark frequent personal computer screens and mobile devices. Musicians are beginning to make strategic moves to combat the low royalty rates that spring from online music streaming. As a result, recorded music could make a dramatic shift from a profitable business to a mere marketing strategy for live performances.

“Isolated illegal websites have morphed into a multinational juggernaut that threatens to decimate the livelihoods of all musicians, songwriters and performers,” Cash said.

She experienced this firsthand when, over an 18-month-period, she was paid a mere $114 for 600,000 streams of her music on a subscription website.

“I am a fan of new technology, but my enthusiasm is tempered by the realization that these new business models are all cast against the backdrop of at least two decades of crushing digital piracy,” Rosanne Cash said.

The trend is growing rapidly, with Spotify currently claiming more than 50 million global users and launching in 20 new markets in 2013 alone, making the service available in 55 countries altogether. It claims to pay 70 percent of the revenue to the rights holder of the song, but after the rights holder has split this revenue between musicians, songwriters and everyone involved, it often ends up being a small amount of money, especially for the songwriters.

Erik Hickenlooper, a Utah writer who created the #1 Billboard hit “Buy Me A Rose,” later used by Kenny Rogers, joins in the frustrations of others who are finding it hard to make a living off subscription site revenue alone.

“Part of my royalties come from albums sold,” Hickenlooper said. “I have noticed a dip in mechanical royalties for sure. People aren’t buying albums as much anymore; they’re turning to Spotify or Pandora.”

This point is proven through the market capitalization of these companies, with Pandora reporting at about $2 billion in value and Spotify at $3 billion.

Spotify claims, however, to be a solution to the music piracy problem, generating royalties where illegal downloads used to yield no revenue. The average music consumer likely downloads illegally but still spends $55 dollars per year, whereas Spotify consumers spend $120 a year.

“Subscription websites are trying to help, but I think they are only a Band-Aid on the problem,” said local VanLadyLove vocalist Travis Van Hoff.

Subscription websites are not necessarily a negative thing for local artists, as they allow artists to find global recognition. But for big-label musicians, it does not generate the same amount of money that comes from selling albums.

“Artists lost a major revenue source (physical product) and rarely have the capital or marketing savvy to really make good on the increased reach that these networks might provide,” said Andrew Maxfield, a professor at BYU who teaches music entrepreneurship for artists.

Some artists are speaking out in bold ways against these trends. Taylor Swift, for instance, recently pulled all of her albums off Spotify.

“I think there should be an inherent value placed on art,” said Swift in a Time Magazine article by Jack Dickey. “I didn’t see that happening, perception-wise, when I put my music on Spotify.”

The site does not pay royalties based on each stream but rather measures an artist’s “market share,” which divides a song’s streams by the total streams on Spotify and determines a final pay-out percentage. iTunes, however, pays artists 7–10 cents each time someone downloads their songs.

“Well, they (subscription websites) are great for the consumer, aren’t they? But honestly, they’re driving the music industry into the ground,” Hickenlooper said. “On the flip side, the whole Internet revolution has allowed some grass roots artists and bands to find daylight in ways they would not have been afforded 20 years ago.”

The impacts for artists are vastly different based on whether they are local musicians or international celebrities. Local bands are using this change in the industry to their advantage, releasing things like EPs and music videos to generate previously unreachable listeners.

“With song sales down so much we need to find other ways to make money,” Van Hoff said. “If a band can guarantee 1 million views per video you can then find sponsors that will pay upwards of $100,000 each video.”

Top musicians are also making changes in how they obtain revenue, increasing their emphasis on licensing songs for movies and TV shows rather than depending on record sales, Van Hoff said.

With this change come the refocused efforts of musicians to find recognition rather than revenue.

“Ninety percent of artists, unless you’re a huge deal like Taylor Swift, don’t make money through music sales anymore,” Sundrud said. “That’s why up-and-coming artists release their music for free in hopes of gaining a wider audience and getting more gigs.”

While big-name artists like Swift and Rosanne Cash can afford to make bold statements about the shift caused by music subscription websites, most musicians have to find ways to adapt.

“Artists have to marry the practice of making great art with the practice of running a business,” Maxfield said. “That was the same story 20 years ago, but the mechanisms for generating revenue have changed, and so must artists’ individual business models.” 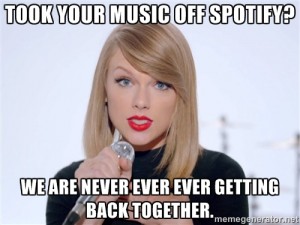