Jim Leach spoke to BYU students on Feb. 24 about the importance of core cultures and values in politics.

Leach was the ninth chair of the National Endowment for the Humanities. He was nominated by President Barack Obama on July 9, 2009, and confirmed by the Senate in early August of that year. Leach began his four-year term as NEH Chairman on August 12, 2009.

One of the key points of his speech was to explain that mutual understanding and peace are the most effective ways of leadership.

“America cannot lead wisely unless we come to understand people and their variations far more deeply than has been reflected so far in this century,” he said. “Without shared learning and handshakes of understanding there can be no more than minimal trust and minimal security for family and nation.”

He said one of the first steps of gaining this mutual understanding is to begin to have a genuine interest in others. This is achieved through a sincere interest by studying other societies.

“The only credible methodology to secure a noble life on the planet is to build habits and techniques of conflict resolution that do not involve a recourse to violence at every level of social interaction,” Leach said. “This can only be achieved by loving or at least respecting thy neighbor instead of hating what makes them different.”

He explained that LDS members and missionaries are a good example for the rest of the world on the issue of learning core cultures.

“Mormons bring a deep perspective to their international advocacy because they come to know up close and personal the families and their personal challenges,” he said.

He stated how dysfunctional politics are today, but they are only a “surface problem.”

“The real understanding needs to come from the depths from below the cultural society and others,” he said.

His final point was that sports are a good example of how politics should work. There are many different people from many different cultures and backgrounds all working on one team for the same thing.

In closing, Leach ended with this question: “Team effort trumps individual stardom — should not the common good in politics come before self-interest?” 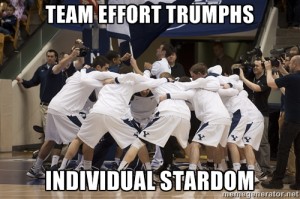