The documentary film “The Abolitionists,” featuring Tim Ballard‘s Operation Underground Railroad child rescue efforts, will show at BYU’s Varsity Theater on Feb. 25, and Ballard himself will hold a Q&A session directly after.

“The Abolitionists” focuses on Operation Underground Railroad‘s child rescue efforts, an organization Ballard founded in 2013. The film shows both unsuccessful and successful attempts to rescue children from bondage. Ballard has since revealed himself as the face of the organization to raise awareness to end the epidemic of child sex slavery.

Filmmakers have not yet released the film to the general public but held a private screening at the Megaplex Theatres in Sandy on Jan. 27.

“Studio C” members Stacey Harkey and Mallory Everton attended the screening and shared their reactions. “It was very eye opening. It’s very sad, but … it’s a sad that motivates you to act, something you recognize as a problem and that you can change,” Harkey said.

“I’m really glad that there are people like that out there, doing stuff like this,” Everton said. “There are a lot of evils out there in the world, and I think that we can all do a little bit more to help. The more people who know about O.U.R. Rescue, the better.”

The chance of a human trafficking victim getting out of slavery is 1 in 100, according to the BYU Anti-Human Trafficking Club. The club is working to change those odds. It was founded in 2009 and hopes to become the most useful campus-based asset for organizations that fight human trafficking.

Alexis Cooper is the operations and finance manager of the BYU Anti-Human Trafficking Club and knows it happens more often than people know. “The thing with human trafficking is that a lot of people think it’s one of those shady issues where people think, ‘Oh that could never happen to me,'” she said. “But that’s really not the case. It’s something that happens here in America and something that happens even here in Utah.”

Equality Now, a human rights organization that seeks to protect women and girls, estimates there are at least 20.9 million people bought and sold into commercial sex servitude. Two million of them are children.

The film will show at the Varsity Theater on Wednesday, Feb. 25, at 6 p.m. The showing will be free, and seat availability will be on a first-come, first-serve basis. Varsity Theater employees will accept donations to give to Operation Underground Railroad.

“Documentaries like this are what inspired me to get involved in the (BYU Anti-Human Trafficking) club, and that is what we are hoping this documentary will do — increase awareness and motivate people to action and to get involved in our club,” Cooper said. 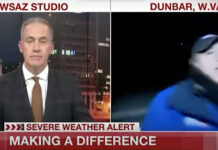