The new exhibit “Folding Paper: The Infinite Possibilities of Origami” at the MOA explains the evolution of origami as well as modern-day applications to the fields of mathematics, science and engineering.

The display contains the exotic works of 45 origami professionals from around the world. Artists from Japan, Uruguay and Russia have offered their talents to add to the beauty of this exhibit. Some sections of the exhibit include:

MOA student educator Abigail Pinager answered questions about why people come to the exhibit and why BYU students should attend:


Miri’s Golan “Two Books” is a piece displayed in the exhibit. Golan is an origami expert who is the director of the Israeli Origami Center. The work is purely paper and handmade books. 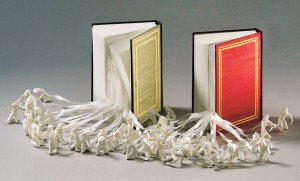 The Folding Paper exhibit was developed by Meher McArthur. McArthur is a freelance Asian art historian, author and educator. She has been curator of East Asian Art at Pacific Asia Museum in Pasadena and also advised for the Victoria and Albert Museum in London, which is the world’s largest museum of decorative arts and design. Her worldwide tour of Folding Paper will continue through 2016.

The MOA will hold an “After Dark” party on Friday, Feb. 13, to celebrate the debut of the new exhibition. The event will include live music, Japanese cuisine and a demonstration on how to create origami. The event will be held from 7 to 10 p.m. The party is free of cost to all.

More information can be found on the MOA’s website. Information about the “After Dark” party can be accessed on Facebook.

The exhibition will be at the MOA through June 2015.