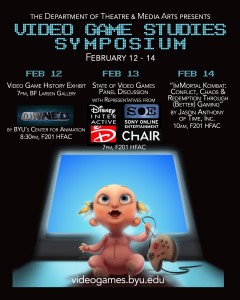 The symposium, organized by BYU’s Theatre and Media Arts Department, will include presentations of creative and scholarly work from students and faculty from across campus.

Anthony was quoted on the BYU video games website for saying, “Games have been a long and rich part of religious practice. … As our culture does more communicating through games, it’s only a matter of time before games once again become a part of our spiritual equation.”

To those who claim video games are harmful, Phillips said interactive entertainment has “amazing potential” to redefine our media. He said he can’t speak for everyone who plays video games and that there are people who should limit media intake because of the ways it affects them.

Kelyn Igekami is also an undergrad in media arts. Igekami helped with the symposium planning and said students can expect to learn a little bit more about why video gaming is a medium that can and should be looked at simultaneously from an enjoyable perspective and more critical perspective.

“As a medium, it (video gaming) has become such a huge part of our culture,” Igekami said. “It involves so much history and artistry that there’s a lot more depth to it than people give it credit for. And its popularity in the past and its growing popularity now is indicative of our culture as a whole.”

Phillips helped with the symposium as well, but he gives credits to the lead faculty members. “The effort was led by our faculty members, Benjamin Thevenin and Sharon Swenson,” Phillips said. “A few of us students participated and helped find leads on potential speakers, but this symposium is their brainchild through and through.”

Symposium presentation topics include “Effects of Video Games,” “The Future of Game Design,” “Everyone Can Game: Designing Video Games for All Audiences” and “A Mini-Game Jam,” which will involve student teams designing prototypes of games.

The symposium will begin Thursday, Feb. 12, at 7 p.m. in the HFAC’s BF Larsen Gallery with an opening social and the launch of an interactive, Video Game History exhibit.