Two former BYU baseball players have had their first taste of big league action after being selected in the MLB draft. Now Jacob Hannemann and Taylor Cole look to crack the major league.

Hannemann and Cole believe a large part of their success has come from putting their faith and families first. The duo hopes to continue that success and has returned to Provo to train with the current BYU baseball team.

Hannemann played center field with BYU his freshman year before being selected as the second pick in the third round of the 2013 MLB draft by the Chicago Cubs. He had originally been drafted by the Kansas City Royals in the 48th round of the 2010 MLB draft but turned down the offer to serve a mission. 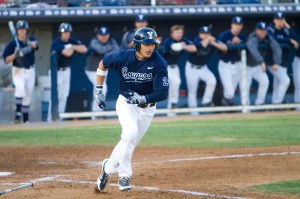 “It was the first time I questioned whether or not a mission was right for me,” Hannemann said.

He now sees how the decision to serve has prepared him for his career in baseball.

“(A mission is) a life lesson,” Hannemann said. “It makes you want to be successful. It’s hard, there’s failures, but it gets you through those walls.”

After proselyting for two years in Arkansas, Hannemann found himself back on the diamond.

“I got back from my mission and didn’t think I’d be playing ball for two or three years, but Coach Littlewood was really good to me,” Hannemann said. “He saw my potential and had a lot of faith in me.”

He hit three game-winning RBIs in his first season back and led all WCC freshmen with a .380 batting average during conference play. Hannemann also credits his success to his family, who would always push him to achieve his goals.

“Ever since I was two, my parents pictured me playing baseball,” Hannemann said. “My dad took the time to help me and be my coach.”

Cole came to BYU in 2011 after returning from his mission in Toronto, Canada. He held a  2.99 ERA as a starting pitcher that year and was selected by the Toronto Blue Jays in the 29th round of the 2011 MLB Draft.

“(BYU) was the perfect place for me to come to because they understood how to handle a returned missionary,” Cole said. “They gave me a chance right out of the gate to be one of the starters. I couldn’t have asked for a better period to get acclimated to the real world again after a mission.”

Cole reached a career high at BYU with 10 strikeouts in seven innings during a game against the University of Utah.

“A lot of (returned missionaries) lose that fire and intensity to play the game,” Cole said. “The scouts wanted to see, ‘Does Taylor have what it takes?’ I remember I struck somebody out, and I gave a yell after the strikeout.”

“My dad has always been really tough on me in a good way,” Cole said. “He’s always stretched me to have confidence and to be the best that I can be.”

Hannemann and Cole have both given great performances in their time at BYU. They hope to continue to be positive forces for their new teams, both on the field and off it.