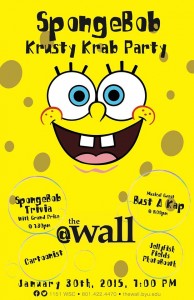 The Wall will host a SpongeBob-themed party to celebrate the release of the new SpongeBob movie “Sponge out of Water” Friday, Jan. 30, at 7 p.m.

Jared Bell, event coordinator at The Wall, said that each semester the venue will host one or two movie-themed parties. The Krusty Krab Party is the first movie event held at The Wall this semester.

Activities for the event include concessions, pictures at the Jellyfish Fields photo booth and drawings of guests by a cartoonist. SpongeBob team trivia starts at 7:30 p.m., with a grand prize of tickets to the SpongeBob movie, premiering Feb. 6.

Techno funk band Bust A Kap will close out the event with original songs and SpongeBob fan favorites.

Kevin Johnson of Bust A Kap said, “We are all huge SpongeBob fans. Our bassist is even named Patrick. Also, my wife and I registered for some of the seasons of the show on DVD for our wedding registry, though sadly no one got them for us.”

The band is no stranger to The Wall. The members’ humorous performances and tendency to perform clad in goofy costumes will lend to the excitement of the party.

Johnson said the band has prepared several favorite songs from the TV show to add to its normal set. “It’s not every show that we need to find a sound effect for pants ripping,” he said.

The party will packed with plenty of fun and entertainment for every SpongeBob fan. Johnson said, “We can only hope that we will receive complimentary Krabby Patties for playing.”