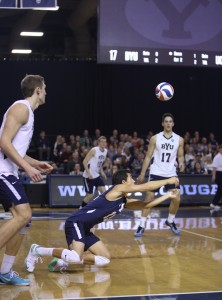 The BYU men’s volleyball team beat UCLA 3-1 Saturday night, completing a two-game sweep of the Bruins in the Smith Fieldhouse.

The first set of the match started off with a service error by the Cougars, giving UCLA the early lead. A series of UCLA blocks helped the Bruins extend their lead to 20-10 before blocks from BYU’s Jake Langlois and Michael Hatch helped close the gap to 21-14. The Cougars’ comeback would ultimately fall short as the Bruins took the first set 25-17.

The lead jumped back and forth between teams in the second set. A Langlois kill started things off before service errors on both teams tied the score 2-2. An ace from Tim Dobbert gave BYU a 10-8 lead before Phil Fuchs’ third kill of the night extended the Cougar lead to three. More kills from Dobbert and Fuchs helped BYU stay ahead late and win the set.

“I settled in and trusted myself,” said Fuchs, who had six kills in the second set. “My coach and teammates trusted me, and that gave me some confidence, and I was able to come in and contribute.”

The third set again started with BYU and UCLA service errors before the Bruins jumped out to an early 5-1 lead. A Joe Grosh kill and block helped the Cougars close the gap 12-11. BYU pulled ahead 13-12 before falling back behind 15-14. Kills from Langlois and Dobbert then gave the Cougars a 21-18 lead. A UCLA service error widened the gap to 24-19, and a final kill from Langlois gave BYU the set 25-19.

The Cougars started strong in the fourth set in what would be an easy win. BYU took to a 12-5 lead and extended its advantage to 19-8 behind kills from Hatch and Grosh. The Cougars went on to take the set 25-15, giving them the two-game sweep over the Bruins.