Bicycle thefts are listed in almost every BYU Police Beat report. When a bicycle goes missing, a student may file a report and enlist the help of friends to find the bicycle.

For senior Max Orton, his stolen bicycle is more than two wheels, a seat and handlebars, and he’s done more than simply ask for help.

Orton’s bike is a white single-speed with black front forks, a gold chain and large red pedals. The handlebars are unlike any other: they are made of antlers.

Orton created a Facebook page and a hashtag to spread awareness through social media. #SpotTheAntlers encourages people to hunt down this two-wheeled animal.

Orton’s custom-made Republic bicycle with the antler handlebars was stolen along with his vintage Motobecane road bicycle.
The bikes were last seen chained to Orton’s house before the Christmas break. Orton plans on filing a report Monday morning with the Provo police.
He said he was “completely devastated” that the chain had been cut and the bikes stolen.
“If all I can get back is my antler bike, I will be happy because I have been riding that for years and years and I have made so many memories with it, which is why I have concentrated the campaign on finding my antler handlebar bike,” he said.
Orton said his Native American Zodiac symbol is a deer and he has grown up attached to nature. He wanted to incorporate the sign into his mode of transportation.
“I believe in making this world a cleaner place, and I made the antler handlebars to be a physical reminder of who I am am and my beliefs. Plus, it is a better alternative to riding a deer,” he said. 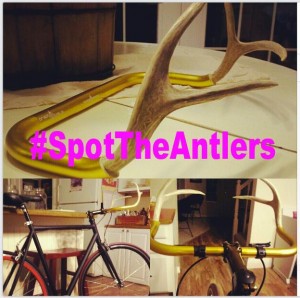 No deer were hurt in obtaining the antlers; Orton found them on a hike. He said the antler bike is easier to spot, and the person who hunts down Orton’s bike will not leave empty-handed.

“The prize is a swag bag filled with amazing prizes,” Orton said. “Some of the swag includes unspecified amounts of cash, candy, a brand new trucker hat, Calvin Klein One cologne, coupons, a date night with me and much, much more possibly.”

Sam Orton, Orton’s brother, said Max Orton rides his bike everywhere and that it is “the love of his life.”

“He harvested the antlers with his bare hands. He has always been one with the animals,” Sam Orton said.

Courtney Mortenson, a sophomore at BYU who is close friends with Max Orton, said he is the co-founder of Provo Cycling Ghost Tours, which launched in 2013.

According to its website, the Ghost Tour program offers guests a bicycle tour “with a creepy twist.” Tour guides take riders throughout the city, sharing historical folklores and visiting allegedly haunted locations.

“It adds to how much he likes to cycle,” Mortenson said.

Derik Flanary also co-founded the Provo Cycling Ghost Tours and is Max Orton’s roommate and lifelong friend. “He puts so much work into his bike to make it his own,” Flanary said.

BYU Police and Provo City Police handle bicycle thefts frequently. According to the BYU Police website, “Bicycles are deemed abandoned if not moved every 72 hours and are subject to impound. Exception is in the Housing Areas.”

Max Orton and his friends are dedicating themselves to this campaign and making extra effort to solve a common problem in Provo.

“I think that cycling is one of the best ways to be happy. It is a way to make the community a better place, which is why I am calling upon the social community to help catch bike thieves with my campaign #SpotTheAntlers,” Max Orton said.