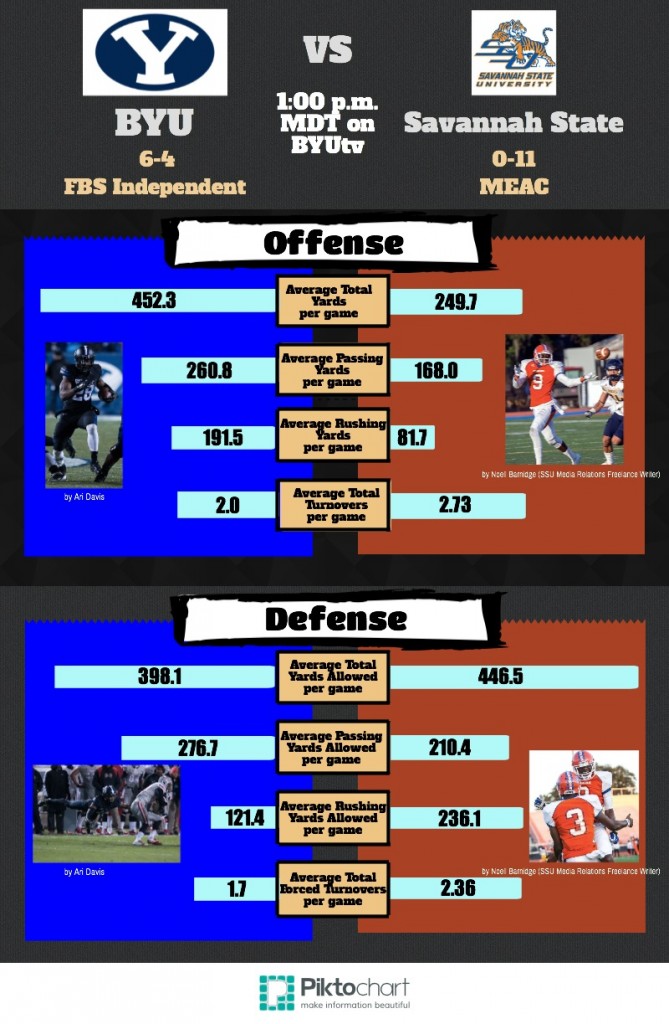 BYU football is set to play Savannah State on Saturday in its final home game at LaVell Edwards Stadium this season.

The Cougars defeated UNLV last week, 42-23, despite a slow first half. The teams were neck-and-neck before heading into the locker room at the half with the score 21-13 for BYU. The Cougars were able to pull out in the third and finished the game with a silent fourth.

“I’m really pleased with the win,” head coach Bronco Mendenhall said. “This has not been an easy season, and the games aren’t easy, but I believe we’ll finish strong. It was a nice football game for our team. A lot of good things and certainly a lot we’ll try to work on. I’m looking forward to the next two games of the regular season to improve our team and culminate it with a bowl game.”

Christian Stewart had a 56 percent passing rate with 325 passing yards and no interceptions. BYU offense achieved 592 total yards against the UNLV defense.

This week, the Cougars are working toward Savannah State and look to improve from the UNLV game.

“We didn’t come out and play like we wanted to against UNLV,” BYU wide receiver Jordan Leslie said. “We want to come out and show how dominant our offense can be, how dominant our defense can be and as a team — as a whole. We kind of want to come out strong and treat it just like any other game. We don’t look at the record, we just look at the next opponent and see what they do.”

Savannah State is fresh off another loss, its 11th straight. The Tigers have not won a game all season, with the latest being a shut-out against North Carolina A&T, 34-0. 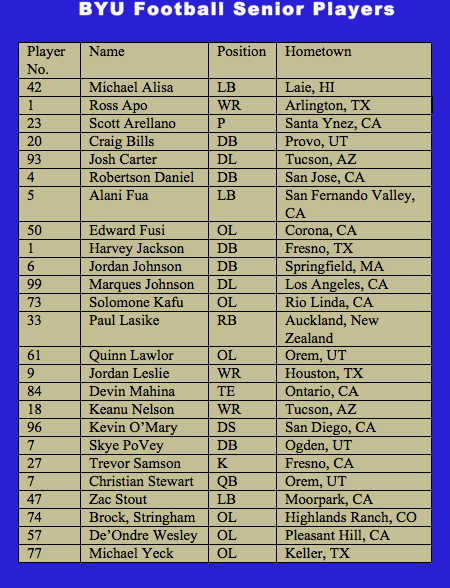 SSU quarterback Leon Prunty completed the game with a 50 percent passing rate, 135 passing yards and two interceptions. The SSU offense only had 165 total yards by the end of the game.

While the Tigers are looking to win at least one game this season, BYU is looking to end the season on a positive note. However, winning this game does not affect BYU’s chance at a bowl game, since it has already accepted an invitation to the Miami Bowl on Dec. 22.

On another note, it will be Senior Day at LaVell Edwards Stadium on Saturday. Coaches, fellow teammates, administration and fans will recognize each player who is a senior prior to the game.

The game will start at 1 p.m. on Saturday, Nov. 22, at LaVell Edwards Stadium. BYUtv will broadcast the matchup.