Hank Smith paired his humor with scientific research when he spoke about a subject that has more than 2,500 books written about it. Smith described the science of happiness and gave 10 guidelines to becoming a happier person.

Smith was the closing speaker at the final event of the BYU Women’s Services 10-day happiness challenge. Smith is a prominent speaker at the Time Out for Women conference in Salt Lake City and is described by Deseret Book as “a favorite” speaker from BYU Education Week and Especially for Youth.

Smith shared the story of his friend, Kristin Warner Belcher, who was diagnosed with retina cancer as an 8-month-old infant. “She’s very proud of her last name,” Smith joked.

Belcher was able to beat the cancer with radiation treatments, but the band of skin around her eyes never grew again even though the rest of her body did. She was bullied in school and later worried she might never marry because of her hourglass-shaped face.

Smith said Belcher went through hard times but chose to be happy. She was an inspirational speaker and often joked with groups of women about her hourglass shape, even if it was a little higher up for her.

Belcher’s left eye went blind when she was eight. She lost her right eye after she was married and had two young boys.

“I may have lost my sight, but my vision has never been clearer,” Belcher said. “Don’t allow your heart to be hardened by hard times.”

Belcher will be speaking at the Time Out for Women Conference in Salt Lake City on Nov. 22.

“It’s not always the case that if things were different we’d be happier,” Smith said. “There is a portion of happiness that comes from the inside.”

BYU sophomore Hannah Curtis shared her experience finding happiness when she focused on gratitude during the 10-day challenge.

“It was great to sit down at the end of the day and realize how much I have to be grateful for,” Curtis said. “I’m happiest when I’m appreciating what I’ve been blessed with.”

Antidepressants help restore neurotransmitters to fight depression but do not necessarily make people happy, according to Smith.

He said happy people try to be happy, surround themselves with happy people and have deep in-person conversations. “One’s happiness comes down to one’s social circle,” Smith said.

Happy people spend money on others instead of themselves. Smith said making money to pull out of poverty can increase happiness, but salaries beyond $75,000 have not been linked to increased happiness.

Happy people use the power of music, which can have the same anxiety-reducing effects as massage therapy. He said happy people exercise and have a healthy diet. 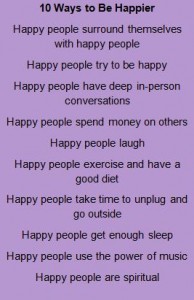 “If you eat junk, you’re going to feel like junk,” Smith said. He recommended exercising early in the morning and getting an exercise buddy to help.

He said happy people take time to unplug and go outside. Twenty minutes of fresh air can promote happiness, while uninterrupted screen time, such as watching a whole season of a TV series in one sitting, is linked to depression.

He told students to set an alarm for bedtime. A lack of sleep can deplete happiness’s essential neurotransmitters.

Smith’s tenth piece of advice for happiness was spirituality. He said daily, weekly and seasonal cycles of spirituality have positive, healing effects.

The 10-day happiness challenge can be found on the Women’s Services blog here.

“These attributes … are immensely powerful forces,” said Women’s Services office manager Pam Smith. “We can use use (them) to expand our happiness.”