BYU’s offense totaled 21 points in the third quarter and the defense blanked the Rebels in the fourth to secure victory.

“I’m really pleased with the win,” Bronco Mendenhall said. “Tonight was a nice football game for our team. There’s certainly a lot that we could still work on, but I’m encouraged.”

The night started off with BYU (6-4) winning the toss and choosing to defer. Both teams were forced to punt on their first drives, but UNLV (2-9) scored first with a 46-yard field goal from Jonathan Leiva. BYU answered right back on its ensuing drive, using a backwards pass and 30-yard run by receiver Jordan Leslie to take a 7-3 lead.

Early in the second quarter, defensive back Kai Nacua intercepted a pass and returned it 32 yards, setting up a 65-yard touchdown drive. Lasike punctuated the drive with a touchdown run from eight yards out.

UNLV’s biggest play came when running back Shaquille Murray-Lawrence ran in a 68-yard touchdown, giving the Rebels life. BYU found itself only up four points with five minutes left in the half.

On the ensuing kickoff, UNLV’s pooch kick whizzed through the hands of BYU linebacker Harvey Langi, and the Rebels dove on it. UNLV kicked a field goal to cut BYU’s lead to one.

That was the closest UNLV would get the rest of the game. 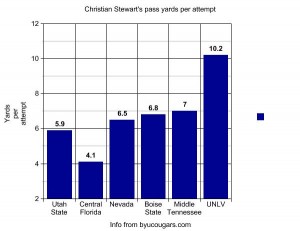 Three minutes remaining in the first half was enough time for Stewart and the offense. BYU drove the ball 65 yards in five plays, ending with Lasike’s second rushing touchdown on the night from four yards out. The Cougars led 21-13 at the half.

The third quarter proved to be the most thrilling of the night, as BYU’s passing game was on point. Stewart connected for touchdowns with Devin Mahina, Lasike and Mitch Matthews.

BYU outscored UNLV 21-10 in the third quarter, giving the Cougars a substantial lead that would not shrink going into the fourth. The Cougars’ lead stayed at 42-23 for BYU the remainder of the game.

The fourth quarter was a defensive battle. BYU punter Scott Arellano made it difficult for the Rebels to have any good field position as he put it deep into Rebels territory each time BYU was forced to punt. Arellano ended the night with seven punts for a total of 287 yards, with a long of 58 yards. Both teams came out of the fourth quarter scoreless, ending the game at 42-23 for BYU.

The team and Stewart seemed to be all smiles after the game.

With the win over UNLV, BYU became bowl eligible with six wins on the season. The team accepted an invitation to the Miami Beach Bowl following the game.