BYU wwimmer Rafael Alfaro will be swimming in the Central American and Caribbean Games that will be held Nov.14–30 in Veracruz, Mexico, as a representative for El Salvador.

While watching the Olympics in 2000, Alfaro realized that it was so 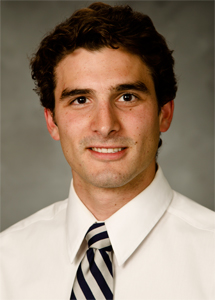 mething he wanted to do, so he decided to make the goal and work for it. His dream to swim in the Olympics was realized in the 2012 Summer Olympics, when he competed for El Salvador swimming the 400m Individual Medley.

Swimming has taught Alfaro how to have “structure” and organization to his life. Since he’s always swimming, he had learned how to prioritize the most important things in his life. In general, there is “nothing that compares” to swimming and how it feels to be in the water.

“It always feels great to be in the water,” Alfaro said. “It’s an escape from reality.”

This could be Alfaro’s last opportunity to compete representing El Salvador, and he wants to make the best of it.

Considering his level of determination, he’s bound to make a splash at the games.

For more information about the games, visit the website.