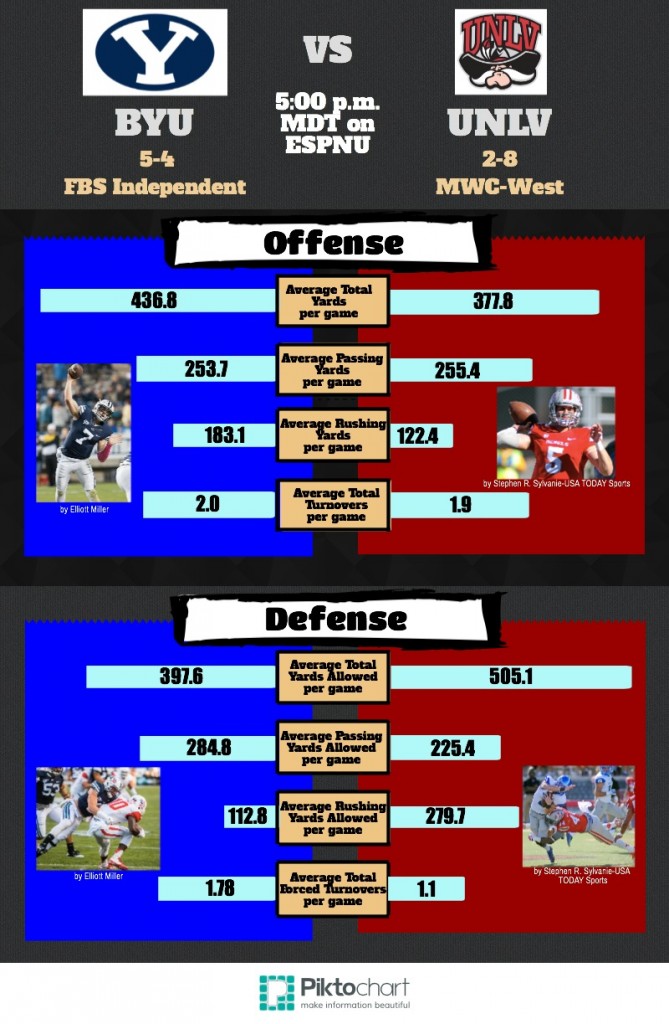 BYU football is coming home to Provo on Saturday for its 10th game of the season, against UNLV.

The Cougars’ last matchup against the Rebels was in 2010, when BYU beat UNLV 55-7. The Rebels are looking to add to their low win count, having only won two games this season. BYU is coming out of a bye week after winning against Middle Tennessee and ending a losing streak the week prior.

The Cougars took the bye to recuperate and set their minds on finishing the season right with wins.

“(We’re) anxious to get ready to play our next game,” head coach Bronco Mendenhall said in a press conference Monday. “A lot of great work a week ago, not only in healing, but school and practice. I like our team’s mindset now. Anxious to have a strong finish to the season and to play well at home this next week. Looking forward to coaching a lot of eager and optimistic players that I think really had a nice bye week.”

In their matchup against Middle Tennessee, BYU quarterback Christian Stewart finished the night with a 62 percent passing rate, 316 passing yards and two touchdowns of his own. BYU’s offense was able to get 444 total yards while the defense stopped MTU at 228 total yards and forced two turnovers.

Despite BYU’s much-needed success, the Cougars lost a key player. Running back Jamaal Williams left the game in the third quarter due to a severe knee injury and is not expected to play for the remainder of the season. Stewart will have to look for other alternatives without Williams, who was averaging 73.6 yards per game.

UNLV will be coming off a loss against Air Force, 48-21. The Rebels scored early in the game but were not able to keep up as Air Force finished with six touchdowns and 542 total yards compared to UNLV’s three touchdowns and 339 total yards.

“We’re kind of okay is what we are, and okay doesn’t win you games,” UNLV head coach Bobby Hauck said in a press conference after the Air Force game. “We’re not playing well enough to win right now, and that’s kind of where we are. We just need to play better. We have got to keep going. There’s not one thing we could single out and say that’s why we’re not playing well enough. It’s just kind of across the board; we’re just not good enough.”

UNLV quarterback Blake Decker ended the game with a 56 percent passing rate and 263 passing yards before he left the game due to injury. He’s expected to play against BYU on Saturday.

Interestingly enough, BYU has two connections to UNLV. BYU’s offensive coordinator, Robert Anae, was an assistant at UNLV from 1997 to 1998. In addition, the Rebels’ current quarterback, Blake Decker, was originally a walk-on and redshirted for BYU back in 2009. After serving a two-year mission for the LDS Church, Decker found his way to UNLV.

BYU’s game against UNLV is crucial for the Cougars. Not only do they want to win the rest of their games, but they also need one more victory to seal their chances of going to a bowl game in postseason.

“We’re coming at UNLV hard,” Graham Rowley, BYU’s defensive end said in a press conference Monday in response to potentially sealing a bowl game. “We’ve been studying their film the past week. That’s why this bye week has been beneficial, because we can know what to do against UNLV. We’ll have two weeks to prepare for them. We cannot wait to get back on the field and face the opponent, no matter who it is.”

BYU fans will dress in black at the game as the team decks out in “black out” uniforms. Kickoff will take place in LaVell Edwards Stadium on Saturday, Nov. 15, at 5:00 p.m on ESPNU.