Please pick up a copy of the Nov. 11 print edition of the Universe to see the full spread, or visit universe.byu.edu/pdf. 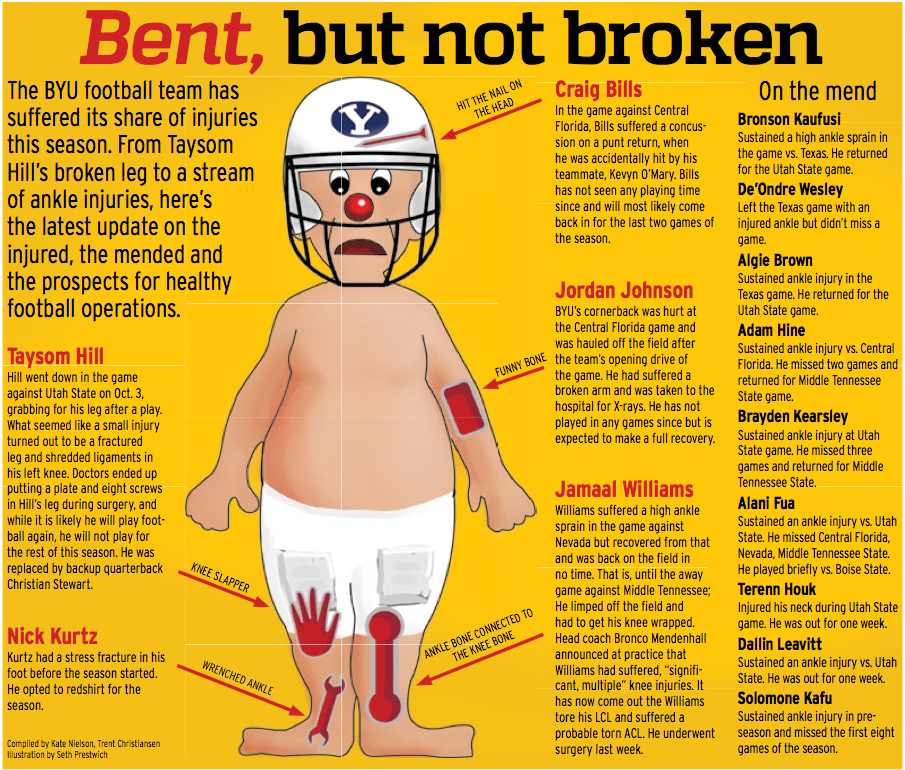 Taysom Hill- Hill went down in the game against Utah State on Oct. 3, clutching his leg after the play. What seemed like a small injury at first turned out to be a fractured leg and shredded ligaments in his left knee. Doctors ended up putting a plate and eight screws in Hill’s leg during surgery. While it is likely he will play football again, he will not play for the rest of this season. He was replaced by backup quarterback Christian Stewart.

Jamaal Williams- Williams suffered a high ankle sprain in the game against Nevada, but recovered from that and was back out on the field in no time. That is, until the away game against Middle Tennessee State. Limping off the field and getting his knee wrapped later on, head coach Bronco Mendenhall announced at practice that Williams has suffered, “significant, multiple” knee injuries. It has now come out the Williams tore his LCL and ACL, and underwent surgery last week.

Craig Bills- In the game against Central Florida, Bills suffered a concussion on a punt return, when he was accidentally hit by his teammate Kevin O’Mary. Bills has not seen any playing time since, and will most likely return for the last two games of the season.

Jordan Johnson- Johnson, BYU’s starting cornerback, was also hurt at the Central Florida game when he was hauled off the field after Central Florida’s opening drive of the game. He ended up having a broken arm and was taken to the hospital immediately for X-rays. He has not played in any games since but it expected to make a full recovery.

Nick Kurtz- Stress fracture in his left foot at the start of the season, missed entire season. Redshirted.