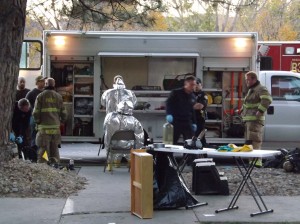 Police are still searching for a resident of the Riviera Apartments after an accidental fire on Friday, Nov. 6, led to the discovery of an apparent methamphetamine lab in his college dorm room.

The fire began in one of the apartment’s bedrooms. After extinguishing the fire with the help of roommates, the room’s occupant left the apartment and has not been seen since, Provo Police said.

“We are looking into finding him,” said Provo Lt. Brandon Post. “I suspect we will be able to find him, even if he leaves the state.”

The suspect is a male BYU student, according to roommate Nick Zarate.

Roommates noticed some suspicious chemicals and glassware while helping put out the fire and contacted the apartment complex’s management, which contacted police.

“It is not difficult to find (meth) in Provo,” Post said.

Post explained that meth labs used to be quite common in this area during the 1990s and early 2000s. Despite a decline in meth labs since then, meth is still a big problem in Provo, he said.

“If you have got something overly suspicious going on with a roommate, feel free to call us and we can send someone out to assess it,” Post said.