My roommates and I adore movies. As an apartment, we probably watch at least one a day. It makes us a little uncomfortable when someone tells us they don’t like movies or that they think movies are a waste of time. Sure, watching a movie means you aren’t outside being active, but in my experience movies are an excellent way to generate social interaction. Ward movie nights are a great way to meet new people, and you can learn a lot about a person by the way they watch a movie. (Talking/quoting during movies can really make or break a relationship.)

Also, movies are beautiful and perfect and an essential part of life.

I get it, though. Movie theaters are expensive, and not everyone is a fan of spending their evenings sitting on the couch staring at a TV screen. As the cold winter months begin to drive you indoors and the local entertainment options begin to look pricey, you may feel as though staying home is your only option.

Have no fear! It is entirely possible to get out of the apartment and enjoy a movie with your friends without breaking the bank. In fact, there are plenty of options right here on campus! Something I regret about my time here at BYU is not taking better advantage of the cool cultural activities on campus, which I feel is partially due to the fact that I didn’t know where or what they were! With your own handy BYU Marauder’s Map, you won’t have my problem.

Located right next to Jamba Juice, the Varsity Theater holds $1 movie screenings every couple of weekends. The movies are popular recent releases, so students can enjoy a real movie theater experience for little money and at a very close location. Tickets can be purchased at the Wilkinson Student Center Information Desk, and they aren’t hard to get.

“Tickets are very popular, but they rarely sell out,” said Hanna Harris, an info desk employee. “I feel like people don’t know about (the shows) very well, which is a shame, because they’re only a dollar!”

The next movie will be “The Grinch Who Stole Christmas” (the live-action, Jim Carrey version) on Dec. 5.

For students who don’t dig popular movies or who may want, instead, to get a taste of international culture and become a more well-rounded person, the International Cinema is the place to be. Each week, the College of Humanities selects several foreign films to show in room 250 of the SWKT. According to its website, the cinema is meant to supplement the foreign language and humanities classes offered at BYU, but every student is welcome to attend.

As I said above, the films are completely free. Each film generally shows several times throughout the week, including several matinee showings on Saturday. For a complete schedule, look here. 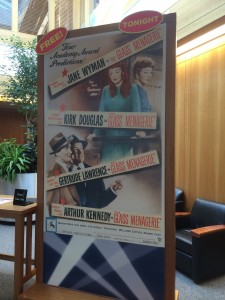 Several times a month, the HBLL pulls out a classic movie from its film archives and plays it in the first-floor auditorium. Last year for Christmas, it showed “It’s a Wonderful Life” using  Jimmy Stewart‘s original copy of the film, which the library now owns as part of its Jimmy Stewart collection.

The films chosen fit a specific genre or theme, including mystery, music, Halloween and Christmas. Tonight, for the “theatre on film” selection, the HBLL will show the 1950 production of “The Glass Menagerie.” Like the International Cinema, the films are open to anyone and are free

Information about upcoming shows can be found here.

Don’t feel confined to campus in pursuit of an inexpensive movie experience. Like the Varsity Theater, Cinemark Movies 8 shows films that have recently finished their run at major theaters for a reduced rate. Prices range from $1.50 for a 2D matinee to $4.25 for a 3D weekend night show. Even the most expensive shows are significantly cheaper than anything at a regular theater, as long as students don’t mind waiting a couple of weeks (or months) to see the newest Avengers movie.

One word of warning: Weekend shows sell out very quickly. I would suggest either buying tickets online (which includes an extra convenience fee of about $1.00 a ticket) or picking them up earlier in the day. Students who don’t may find themselves standing in a line that stretches to the parking lot, waiting to buy tickets for a movie that may be sold out. That is no way to spend a Friday night.

This theater is a bit pricier and farther away, it’s the best bet for student film buffs who have to see a new movie the week it comes out. Every Tuesday, tickets to all movies all day are $5.50, as opposed to the usual price of $6.75 for matinees and $8.75 for evening shows.

Bonus: If students honestly can’t wait a single day to see Mockingjay Part 1 and are willing to pay a reasonable amount, the Wynnsong offers college students a $2 discount when they present their student ID.

What else does BYU and the surrounding area have to offer film fans who don’t want to spend loads of money? Tweet your best BYU survival tips using the hashtag #cougarhacks.