The year 2012 was a historic year for women’s soccer at BYU, with the team going 20-2-2 on the season, and entered the NCAA tournament as a No. 1 seed. It was the first year that the Cougars had won the outright West Coast Conference title, and the team was nearly unbeatable, losing only one game through the regular season. That same team made a deep run into the NCAA tournament, beating Utah State, Auburn and Marquette and making its way to the Elite Eight before losing to a tough North Carolina team.

BYU’s current team got off to a rocky start, going 1-3-2 in its first six games before turning things around by beating 23rd-ranked Long Beach State and starting a 13-game unbeaten hot streak that is still in progress. This team has drawn comparisons to the 2012 team by many, and rightfully so. It has a strong trio of forwards, a midfield that has been able to work with the ball and a defense that has been unbreakable throughout most of the season. The squad has learned to mesh well and has been dominant in conference play, leading to another deep post-season run.

Statistical differences aren’t everything, but they are a good indicator of just how good this team really is. The numbers clearly show how this team looks compared to the 2012 squad and where this current team could be for the next several weeks as the tournament heads on.

To see a statistical comparison, take a look at the numbers below: 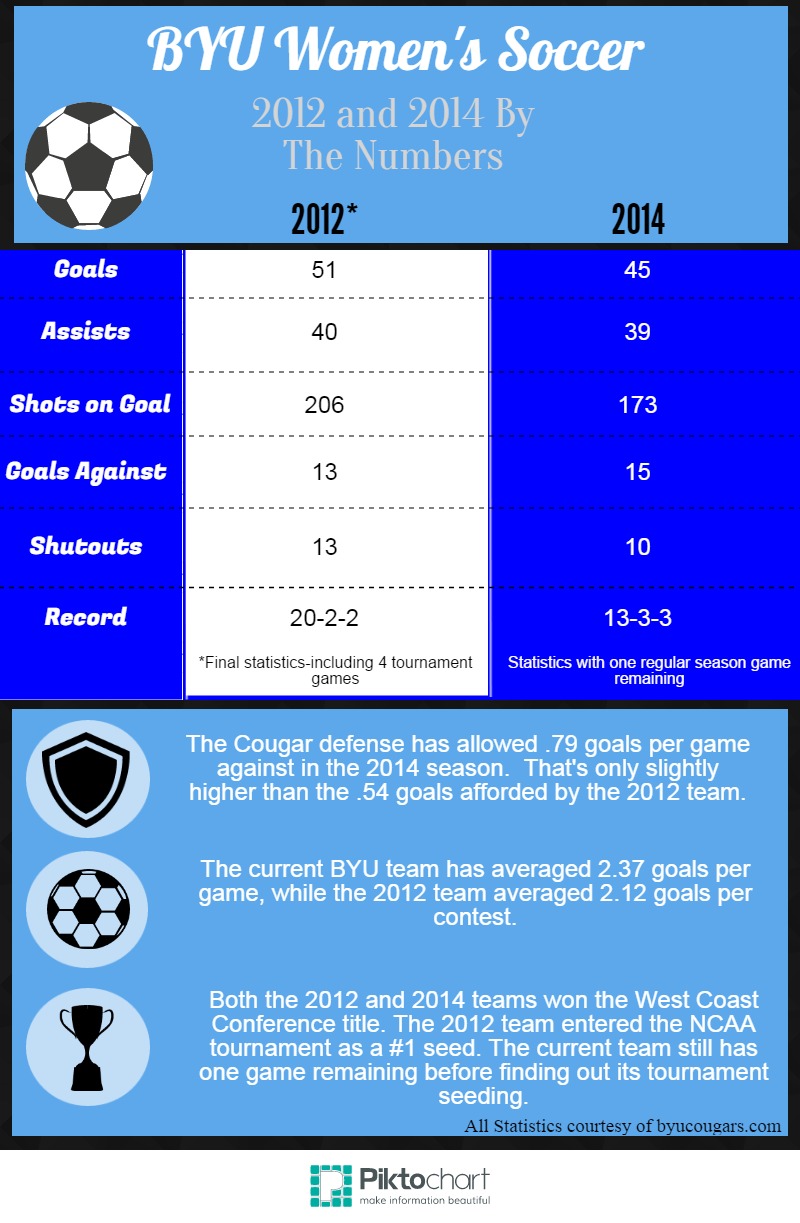 Here are some key comparisons of the two teams to keep an eye on as the tournament begins next week.

With one regular season game remaining, the current team has notched 45 total goals. That’s only six fewer than the 2012 team, which totaled 51, including four in its four post-season games. If BYU can manage two goals against Pepperdine this Saturday, it will match the 2012 team’s total for the regular season. BYU’s starting forwards Ashley Hatch, Niki Fernandes and Michele Murphy have put 27 goals in the back of the net, with 17 assists between the three alone. Hatch also leads the WCC in goals, with 17 total on the season.

The 2012 team allowed 13 goals against through the entire season. The current squad gave up eight goals during its rough start but has only allowed seven since the start of the 13-game unbeaten streak. The play of senior goal keeper Kat Snyder has been instrumental in the Cougars’ success, helping the team to ten shutouts up to this point. The defense has also stepped up and has been playing on point through the conference season. It will continue to be counted on as it finishes up the season and starts tournament play.

Shots and shots on goal

In 2012, BYU took 206 shots on goal. The 2014 Cougars are fast approaching that total, averaging a little fewer than 19 shots per game and putting 173 shots on goal up to this point in the season. The team is doing a better job of getting the ball up the field, distributing from the midfield and then executing its offensive plan through the forwards. While the Cougars are shooting, they are scoring, averaging 2.37 goals per game, a slightly higher average than the 2012 team.

Regardless of comparisons, this current BYU team is as good as it gets. The team is firing on all cylinders and is looking like a real NCAA title contender. Look for them to finish strong this Saturday at Pepperdine and then to make a deep run in the NCAA tournament in the weeks to come.