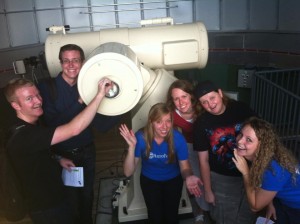 Sirius, Lupin and Andromeda may live in the “Harry Potter” books, but their namesakes can be found in the night sky at this weekend’s planetarium show.
The Royden G. Derrick Planetarium will host its annual Halloween show, “Harry Potter’s Astronomy,” on Nov. 1 at 7 p.m. and 8 p.m. Visitors will be able to dive deeper into their favorite wizarding world as they learn the stories behind the names in the beloved series by J.K. Rowling, explained planetarium supervisor Jeannette Lawler.

“Throughout the books she uses star names and names characters after constellations … the stories behind the constellations provide foreshadowing,” Lawler said, adding that Rowling had a degree in classical literature and used Greek mythology to hint at her characters’ individual stories through their names.

“It’s a not-so-subtle literary device to encourage readers to look up the names,” Lawler said. “She didn’t want the books to just get people excited about reading her books but about education in general.”

Lawler said the Harry Potter planetarium show would teach attendees how to find the constellations and stars named in the books and how they are treated in astronomy.

Members of the BYU Astronomical Society run weekly planetarium shows about various topics. The society is made up of physics and astronomy students, as well as other students who have a passion for the stars.

Society president Carla Carroll, a graduate student studying physics and astronomy, explained that the interactive and fun nature of the Harry Potter show makes it one of the highest-attended shows every year.

“I’ve been to planetarium shows five times because I think they’re awesome,” Shaw said. “You get to sit in these comfy chairs that are practically beds, and it’s amazing how realistic it looks, like you’re outside looking at the night sky.”

For more information about shows, visit the Royden G. Derrick Planetarium’s website. Tickets to the show are $2 at the door. Weather permitting, the observation desk will be open after the show.

The BYU astronomy department puts on a Harry Potter-themed star show each year in the Eyring Science Center Planetarium, just in case you haven’t already gotten your fill of Pottermania. This year’s show falls on Halloween itself: Friday, Oct. 31. Tickets are $2 and can be purchased at the door. There are two shows, the first starting at 7 p.m. and the second at 8 p.m.