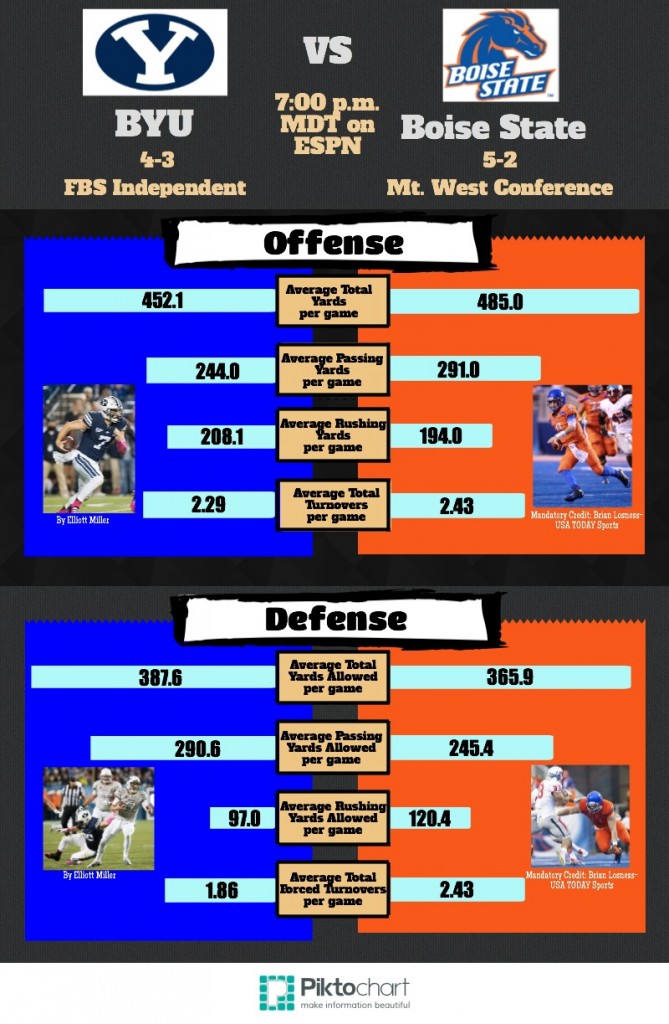 BYU football is heading to Boise State to play in a traditionally hostile environment.

The Cougars and the Broncos have played each other only four times since 2003, with the Broncos holding a three-games-to-one edge. BYU was able to pull off its lone victory last year and is looking to do it on the “smurf turf” this season.

BYU started looking like the team coaches and fans were hoping to see against Nevada, after a disappointing loss to both Utah State and Central Florida. During the first half, BYU led the Wolf Pack 28-13 and looked to be in control of the game. However, Nevada came out in the second half and proved it had no intention of lying down. Instead, it dominated BYU in nearly every aspect of the game, completing a successful come-from-behind victory that ended with Nevada on top 42-35.

“It definitely is a rough time,” linebacker Michael Alisa said. “The most important thing is to not get too far down on ourselves — realize that it is a very real situation. We did lose in the past three games. It’s important to be real with ourselves, but don’t beat ourselves up so much that we dig ourselves into a hole that we can’t get out of.”

At the end of the day, no one blamed BYU quarterback Christian Stewart for the loss. He ended the night with an impressive 408 passing yards, 62 percent passing completion and no interceptions.

The question remains: where was the signature Bronco Mendenhall defense that has traditionally been nationally ranked and created the identity of BYU football over the past eight seasons? BYU allowed a struggling Nevada offense 411 total yards and five touchdowns, three of those in the fourth quarter.

“The lack of precision in the number of spots per play on the defensive side is just reflective of not much experience, not great concentration,” Mendenhall said. “One more gap over, one head fake here, it really is just the execution. There are all kinds of plays to be made out there. It’s just our players being more precise and our coaches helping them be more precise; we’ll just have more success.”

Looking ahead, Boise State will not be an easy team to beat. Boise State defeated its Milk Can rival Fresno State at home 37-27. The game was neck-and-neck until the Broncos were able to pull away in the fourth quarter.

Bronco quarterback Grant Hedrick finished the game with a 70 percent passing rate and a touchdown of his own. Boise State offense obtained 492 total yards.

The Cougars are going to have to watch for the trick plays coming out of Boise State’s offense, a strategy that was successful against Fresno.

“It’s part of what we do,” said Bryan Harsin, Boise State’s head coach. “I think they’re well designed, and I think they’ve been well executed. We are going to continue to do that and find more ways to be creative in that area. They’ve worked for us in critical situations, and we have to continue to find ways to do that.”

As BYU looks ahead, the team recognizes the need for consistency and productivity for four complete quarters if it hopes to beat Boise State.

“We need to come out with the same intensity we had in the first half (against Nevada) and that third quarter at UCF,” said Mitchell Juergens, BYU’s wide receiver. “We just need to figure out how to keep that rolling — continue to make plays on offense so that we don’t have that little hiccup and go a quarter or two without scoring. We’ve got to come out fast with the same intensity and just keep putting the ball in the end zone.”

BYU will play Boise State on Friday, Oct. 24, at 7 p.m. on ESPN. The Broncos are at an 11-0 record of winning at home on Friday nights. BYU hopes to shatter Boise State’s record and end its own losing streak while playing in front of a national television audience.