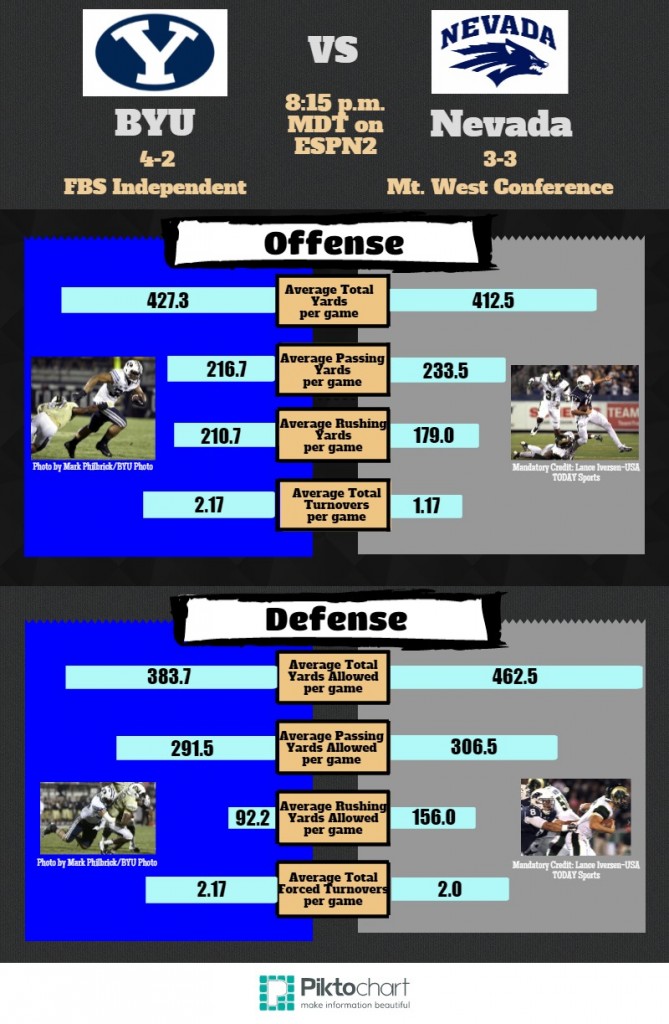 The BYU Cougars is returning home for the fourth time this season as they get ready to face the Nevada Wolf Pack Saturday night. Both teams are looking to come back from two consecutive losses and both are looking to find that win in Provo.

BYU narrowly lost its matchup against Central Florida last Thursday in a game that went into overtime. Despite a key blocked field goal by the Cougars’ Mitch Matthews that sent the game into overtime, BYU was unable to pull out the win. UCF won 31-24.

Despite the loss and some struggles during the first half, Christian Stewart had an impressive third-quarter performance. Thanks to two crucial turnovers and great field position, Stewart completed three passes into the end zone within seven minutes into the second half, bringing BYU back into the game.

Looking ahead to the Cougars’ game against Nevada, BYU coach Bronco Mendenhall expects Stewart to continue to improve.

Going against Nevada this week, BYU’s rush defense is still looking strong. The Cougars have only allowed an average of 92.2 yards per match, making the running game difficult for opponents.

One question that has loomed around the Cougars is why players keep coming out of the game with sprained ankles. Mendenhall and the rest of the staff have tried to come up with a plausible explanation, other than coincidence, but have not found an answer.

“That’s a really good question,” Mendenhall said. “There was one point where we had 10 and that number has gone up. We’ve looked for commonalities. They’ve happened mostly in games. Trainers are researching it, trying to find out what the answer is, but really not much commonality–most of them being rolled up on by somebody else in piles right now. Very few of them out in the open.”

Meanwhile, Nevada travels to Provo coming off a loss of its own. After rallying back from a 28-point deficit against Colorado State, the Wolf Pack scored 21 points in the second half but ultimately lost the game at home 31-24.

If the Wolf Pack cannot run past BYU’s defense, they will need to focus on the passing game. Cody Fajardo had a 54 percent completion rating and passed a total of 297 yards against Colorado State. Two passing touchdowns from Fajardo is one reason the Wolf Pack rallied back.

On another note, the Wolf Pack’s defense has forced at least one turnover in every game this season. This may be a challenge for Stewart as he is still getting a feel playing for BYU.

The Cougars kickoff against Nevada this Saturday, Oct. 18, at 8:15 p.m. at LaVell Edwards Stadium. The game will be broadcast on ESPN2. Both BYU and Nevada hope to stop their losing streaks and bring back the confidence that each team needs.