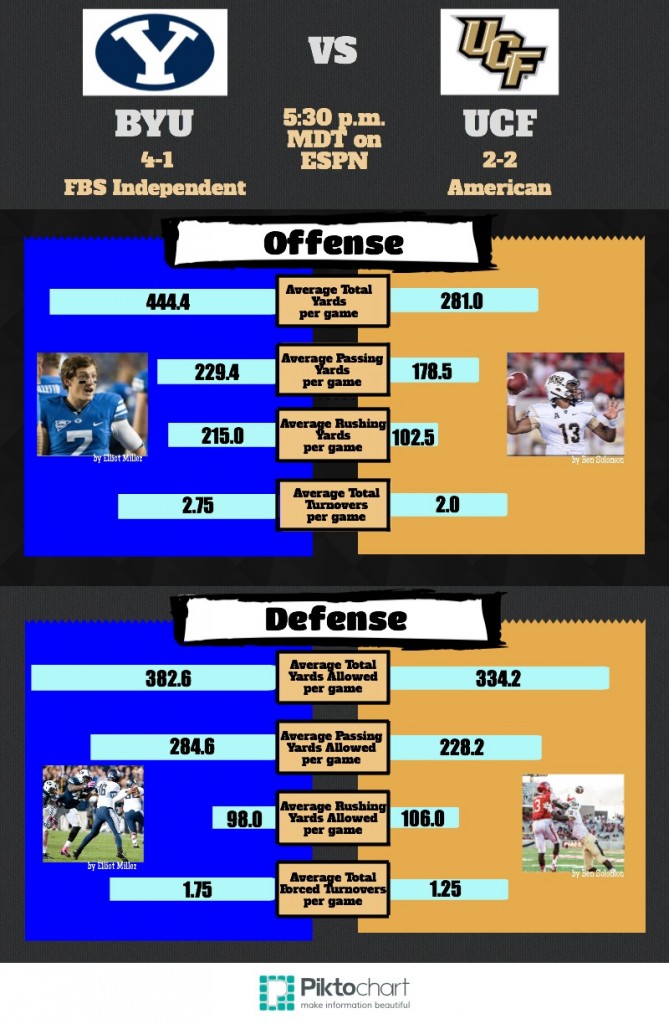 The BYU football team will hit the road early this week as it travels to the University of Central Florida for its sixth game. This is UCF’s second home game of the season. For BYU, this is a long trip to Florida in what is already a short week of preparation.

With Taysom Hill suffering a season-ending injury in Friday night’s game against Utah State, Christian Stewart has stepped into the role of starting quarterback.

Stewart was not able to lead his team to victory Friday night. He threw the ball deep several times but finished with a low completion percentage. He also threw three costly interceptions that prevented the Cougars from scoring touchdowns.

He has had a short week of practice, but there is hope that the coaching staff will be able to prepare Stewart for his first game on the road.

The Cougars have a quick turnaround time before playing the Knights on Thursday. With only three days of practice to get the team refocused and Stewart ready (BYU did not practice on Saturday and Sunday because of LDS general conference), Mendenhall expressed that there was a sense of urgency.

“Not quite finished teaching on a short week with as much practice as we needed to get done, I was allotted a 10-minute team meeting that went for about a half hour and that didn’t even come close to saying what I wanted to say,” Mendenhall said. “So we’ll squeeze in as much as possible before we play Thursday. But there is urgency with the players. There is urgency with the coach. And they’re motivated.”

After a successful 2013 season that included a BCS bowl appearance, the Knights have gone 2-2 this season, winning their most recent game against previous BYU opponent, the University of Houston. The outcome of the game came down to the final seconds of play. Houston was down 17-12 and poised to score the go-ahead touchdown with the ball on UCF’s 10-yard line. Brandon Alexander, a UCF defensive end, forced a fumble and recovered the ball, sealing the victory for the Knights.

“The quarterback broke, and I just knew that his intent was not to pass; it was to run,” Alexander said. “So, he just dove, and when he dove, I dove. … Once the ref came out there and said it was a touchback, it was just a wonderful feeling.”

The Cougars’ kickoff against UCF this Thursday, Oct. 9, at 5:30 p.m. (MDT). The game will be broadcast on ESPN. BYU hopes to bounce back from its loss last week and regain the confidence it had before.