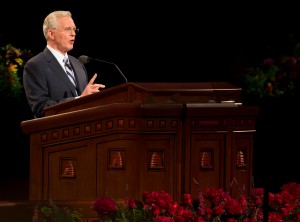 SALT LAKE CITY — “Muy buenos días!” began Elder D. Todd Christofferson of the Quorum of the Twelve, jokingly suggesting that he might continue the trend of non-English conference addresses after Elder Chi Hong Wong delivered his in Cantonese. Elder Christofferson spoke of the necessity of exercising moral agency to achieve spiritual and temporal potential.

He began his talk by describing (in English) a scene from Shakespeare’s “The Life of King Henry V” in which soldiers discuss whether or not the obligation to follow the king’s orders absolves them of moral responsibility.

“Shakespeare does not attempt to resolve this debate in the play, and in one form or another it is a debate that continues down to our own time,” Elder Christofferson said. “Who bears responsibility for what happens in our lives?”

Elder Christofferson explained that taking personal responsibility for decisions is an essential part of our development. “It is (God’s) plan and his will that we have the principal decision-making role in our life’s drama,” he said. “God will not live our lives for us, nor control us as if we were his puppets … nor will his prophets accept the role of puppet master in God’s place.”

The fact that God leaves the responsibility for our growth up to us is a sign of his love, Elder Christofferson said. “He neither compels us nor abandons us. Rather, he helps and guides us. Indeed, the real manifestation of God’s love is his commandments.”

Elder Christofferson ended with some words of encouragement to those seeking to make good decisions in their lives. “We do not need to achieve some minimum level of capacity or goodness before God will help,” he said. “(But) we must exert ourselves, repent and choose God for him to be able to act in our lives consistent with justice and moral agency. … My plea is simply to take responsibility and go to work so that there is something for God to help us with.”