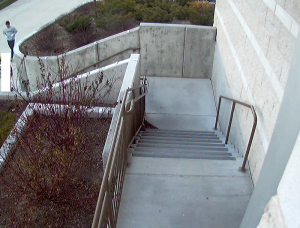 The judge deemed there to be enough evidence to send Nathan Fletcher to trial in a continuation of the preliminary hearing for the BYU student charged with sexual harassment on Thursday, Sept. 25.

Fletcher will be tried in connection with a series of sexual harassment incidents that occurred on and near BYU campus last January to March. The former BYU Track and Field member faces two accounts of misdemeanor sexual battery.

Fletcher appeared to be calm on Thursday at the 4th District Court in Provo, with his parents seated behind him. His parents whispered something in is ear before the beginning of the hearing. Fletcher, who maintains his innocence, would occasionally exchange a few quiet words and a smile with his lawyer.

Several pieces of video evidence were presented during the hearing, including one of an individual groping a girl mid-jog outside the new Heritage Halls on BYU campus. Another video shows an individual running through the Smith Fieldhouse.

The prosecution called several members of the BYU Track and Field team to the witness stand to show that the individual in the BYU surveillance videos can be positively identified as Fletcher.

The first witness called to the stand was Fletcher’s former track teammate and the current Director of Track and Field Operations.

He detailed how he came to the conclusion that the individual on the videos is indeed Fletcher. After watching the videos, the first thing he noticed was the runner’s clothing.

“I have all the same clothes from the team in the same years,” the witness said.

The defense questioned whether the face was identifiable, to which the witness responded, “It’s hard to distinguish anything for sure.”

Despite the debate over whether the apparel is completely identifiable or not, each witness was very confident that the person in the video was Fletcher because of one thing — his running style.

Due to each witness’ independent conclusion that the person was Fletcher, Judge Roger Griffin ruled that the case will go to trial.

At one point the prosecution showed the defense a set of photos from Fletcher’s Facebook account showing that he owns similar items to those that the runner was wearing. Allan’s posture changed as he reclined back in his chair and grasped at the armrests.

Fletcher will appear in court for arraignment on Oct. 9, after which a trial will follow.