Imagine escaping hordes of fans and playing live television concerts drowned in the screams of hysterical young girls. Visualize dodging the press while trying to keep Paul McCartney’s grandfather out of trouble.

Those are just a few scenes that composed a day in the life of the Beatles in their full-length film debut, “A Hard Day’s Night.” This year marks the 50th anniversary of that historic film, which was originally released in the U.S. on Aug. 11, 1964.

The film, like the Beatles themselves, has been influential since its release. BYU faculty members shed some light on what makes “A Hard Day’s Night” and the Beatles’ legacy so important today.

“‘A Hard Day’s Night’ was the film that introduced Americans to Beatlemania,” said BYU English professor Trent Hickman, who teaches a class about American culture through the Beatles. “It was in many respects a big music video before MTV even existed.” 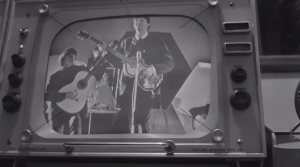 Richard Lester, who had previously collaborated with the British comedy troupe the Goons, directed the film. Lester’s short film with the Goons, called “The Running, Jumping and Standing Still Film,” impressed the Beatles, and they were willing to work with him when United Artists approached them about making a feature-length film.

“I sometimes think Richard Lester doesn’t receive enough credit for directing it because it seems like such an effortless film, like we could just follow these guys around with a camera and have a great movie. Actually, that may be partly true, but it’s not entirely true,” said BYU film professor Thomas Russell.

According to Russell, others also contributed to the cinéma vérité style of the film. For example, cinematographer Gilbert Taylor used handheld shots to give a natural feel to the scenes. Editor John Jympson broke away from linear storytelling rules using quick cuts that allowed for digressions from the overarching narrative. 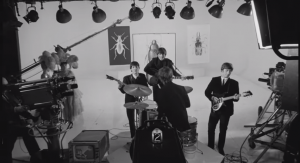 Alun Owen contributed to the film’s authenticity by allowing the Beatles to retain their native Liverpudlian speech patterns in his Academy Award-nominated script. In addition, George Martin’s score for the film was nominated for best score.

From the film’s opening scene of the Fab Four running from a mob of fans, with George Harrison and Ringo Starr tripping on the sidewalk, it was clear that “A Hard Day’s Night” wasn’t going to be a “glossy, promotional film from the cigar chompers at United Artists,” Russell said.

Reviews of “A Hard Day’s Night” praised the film for its unique vision and playfulness. Critic Andrew Sarris famously wrote in The Village Voice on Aug. 27, 1964, that the film was “the ‘Citizen Kane’ of jukebox musicals.”

BYU English professor Phil Snyder recalled seeing the film “three or four times” with his little sister when it first came to the Fox theater in his hometown of Fullerton, California. Snyder gave his children deluxe edition DVD copies of “A Hard Day’s Night” as a Christmas present a few years ago. 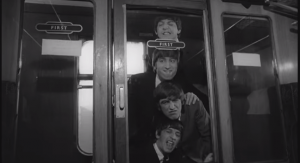 “My kids all know the Beatles, and now my grandkids do because it’s incumbent on us to pass down that kind of musical heritage,” Snyder said.

Musically, around the time of the film’s release, the Beatles were already developing their own style and sound by incorporating elements from diverse forms of popular music. This included influences that ranged from Broadway to Tin-Pan Alley songwriting, from American rock ‘n’ roll to early Motown, said BYU music professor Michael Hicks.

“The Beatles were like kids in a candy shop,” Hicks said. “They just were grabbing all this stuff and bringing it into their music.”

Hickman said the Beatles also adopted elements of American popular culture and movies, added their British sense of humor and mannerisms “and sent it back across the Atlantic to the Americans, where a booming youth culture was ready to eat it up.”

Hicks, who was a young boy when “A Hard Day’s Night” was released, recalled the unique sound of the Beatles’ recordings during those early years. He remembers listening to the opening drums and guitar on the song “She Loves You” and how it sounded like an “explosion on the radio speakers.”

The Beatles’ compelling songs and sounds still affect people today. Catherine Mott, a BYU student and longtime fan of the Beatles, described the music as having an uplifting quality that “makes you feel better and expresses emotions in unusual ways.”

“They as a band stood for things and never apologized for it,” Mott said.

“A Hard Day’s Night” and the early music of the Beatles will likely continue to influence generations to come.

“The film scolds humorless suits, business hawks and even the culture that worships rock stars; or, maybe better, the film just chooses not to take those people seriously,” Russell said. “But it’s one of the more gentle, joyful films a person can watch. It was ahead of its time in many ways. But so were the Beatles.”