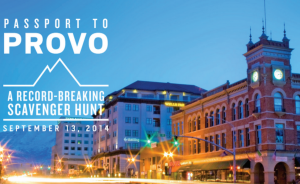 The City of Provo, Downtown Provo Inc. and Google Fiber joined together to organize the record-breaking scavenger hunt. The event, named Passport to Provo, is free for the community and sends participants hunting all over downtown.

Teams of “hunters” complete challenges in various categories including downtown culture, outdoor adventure, quirky and fun, community service and local businesses, according to Google’s head of sales and marketing in Provo, Devin Baer.

Participants have the opportunity during the event to discover Provo businesses and receive samples, new products and give-aways.

“We really hope people can come away with not only a bunch of new experiences downtown, but also a bag full of goodies,” Baer said.

One of the local businesses involved in Passport to Provo is Sodalicious, a supporter of Provo’s downtown life. Owner Kevin Auernig revealed a new drink being released for the event. Participants can taste and create a name for the new drink combination.

“Downtown Provo is becoming something really cool,” Auernig said. “We want to be a part of it.”

Mike Buonomo, executive director at Downtown Provo Inc., said the event is meant to bring the Provo community together and break a world record. Additionally, Buonomo hopes to “showcase the downtown area with everything it has to offer.”

“The synergy with the scavenger hunt idea was so strong because people can discover new things in Provo,” Baer said. “They can have new interactions, build new relationships and experience a really cool, up-and-coming area.”

Of course, the event also wants to break a world record. The University of Chicago set the previous record for the largest scavenger hunt in 2011. To beat this record, Provo needs at least 925 participants. An official judge from Guinness World Records will attend the event, but Baer said he hopes to do more than simply make it into the record book.

“We’d love to show up in true Provo style and just shatter that record,” Baer said.

The scavenger hunt begins at 1 p.m. on Sept. 13 at the Utah Valley Convention Center. Hosts are also throwing an after-party that evening at the Convention Center for participants. The celebration features Ryan Innes, DJ Skratchmo, Bboy Federation and FlipOut Flip Books. To register for or to learn more about the event, visit passporttoprovo.com.