Real Salt Lake fans celebrated Wednesday, July 30, as Joao Plata, a Real Salt Lake forward, fired the ball into the back of the net to tie the game 1-1 against the New York Red Bulls. The 5-foot-3-inch 22-year-old has continued to impress on the field and has become an example of success from hard work and dedication.

Before Plata was scoring goals and signing autographs, he was a little boy in Ecuador and dreamed of becoming a professional soccer player.

Plata was raised in Guayaquil, Ecuador, along with three brothers and two sisters. Soccer was always Plata’s passion, and at the age of 7 his father signed him up for the Barcelona SC 7-to-14 team. 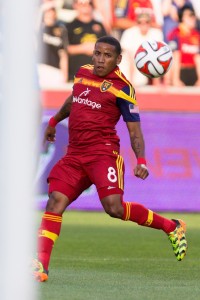 “After school in the afternoon, every afternoon, I would try to play soccer,” Plata said.

Life in Ecuador was full of poverty, but his parents made sacrifices to save for his training, according to Plata

“They helped me a lot,” he said. “Sometimes they didn’t have it; I would cry and be sad because I would want to train.”

Plata eventually gained recognition and was offered a three-year scholarship to the Alfaro Moreno Academy private soccer school for youth ages 14–17. This prepared him for his professional career that started with the Liga de Quito professional team in Ecuador.

In 2011, Plata entered the MLS draft and was picked 49th by Toronto City, where he played two seasons.

After not making much of an impact, he was traded to RSL in January 2013. Plata has consistently demonstrated he is an asset to the team.

“I wanted to play in the U.S.,” Plata said. “When they picked me, I was happy. I know RSL is a good team. I said, ‘Thank God for the opportunity’.”

In the 2013 season, Plata scored four goals and had eight assists in 29 appearances. During 2014, he has appeared in 15 games and has scored nine goals.

“He works very hard; he’s a goal scorer,” said Robbie Findley, Plata’s teammate. “When the ball is at his feet he’s very dangerous going at defenders one on one.”

According to rslsoapbox.com, a popular sports review website, Plata might be the most efficient scorer in MLS right now. Plata leads MLS shots on goal per shot at 69 percent. Statistics prove his skill, but according to teammates, he brings a lot more.

“My energy, all the time. When I’m playing I run 100 percent,” Plata said. “I want to make the team happy and the fans also.”

Adjusting to the U.S.

Plata has found a home with RSL, but the transition was initially difficult.

Plata said he spoke little English when he came to the U.S. and was not familiar with the culture and regulations in the states.

“The first month that you play is hard, especially with the new language, the new teammates and the new system,” Plata said.

RSL team administrator Salvador Perez was one of the first people to meet Plata when he started preseason training in January 2013. Perez helped Plata adapt to the new environment and feel comfortable during the transition period.

“He is a good asset,” Perez said of Plata. “He’s easy to work with and a nice and smart person.”

Plata has taken advantage of the English classes RSL offers to foreign players. The team pays for the classes, and if players miss classes they must pay a fine. Plata asked for the English classes when he first joined the team and has been taking lessons for a year and a half. He says it has helped with his communication on and off the field.

Lissette Hunt, a close friend of Plata’s who is originally from Ecuador and now resides in Utah, describes him as a good friend and an honest person.

Plata’s teammates describe him as a selfless person with good values.

“He’s a very likeable person, very unselfish. … He’s willing to go out there and put in work for the guy next to him,” Findley said.

Plata is the only athlete in his family, but he says they have supported him through his whole career.

“I miss them. I call them three to four times a week on Skype,” Plata said. “They’re proud of me, and they’re happy because I love my job.”

After his soccer career is over, Plata said, he eventually wants to return to Ecuador to raise his family and study engineering. But until then, he plans to continue to live out his dream of being a professional soccer player and hopes to one day play for Spain.

From playing in small parks in Ecuador to sold-out stadiums at Rio Tinto, Plata’s dream of being a professional soccer player has come true.